Urbino is the place where the beauty of the countryside marries the elegant style of the city.

This wedding had earned the town the title of “ideal city” of the Renaissance. The story of Urbino is an invite to be involved in a unique experience, not just an ordinary vacation; it’s an opportunity to be surprised by the talent of its artists over the centuries.

As an essential step in an ideal tour of the Marche, Urbino is loved by whoever is into some strong urban trekking. Being the town completely walkable the best way to be captivated by its eternal charm is to visit every inch by foot.

How to get to Urbino

The city is on a hilltop, at the foot of Appennino, in the southeast side of Montefeltro, area populated by forts and castles.
Many tourists are surprised when they realize than Urbino doesn’t have a train station. The closest station is in Pesaro, but it is however reachable by car or bus; the nearest airports are Falconara (Ancona) and Rimini. 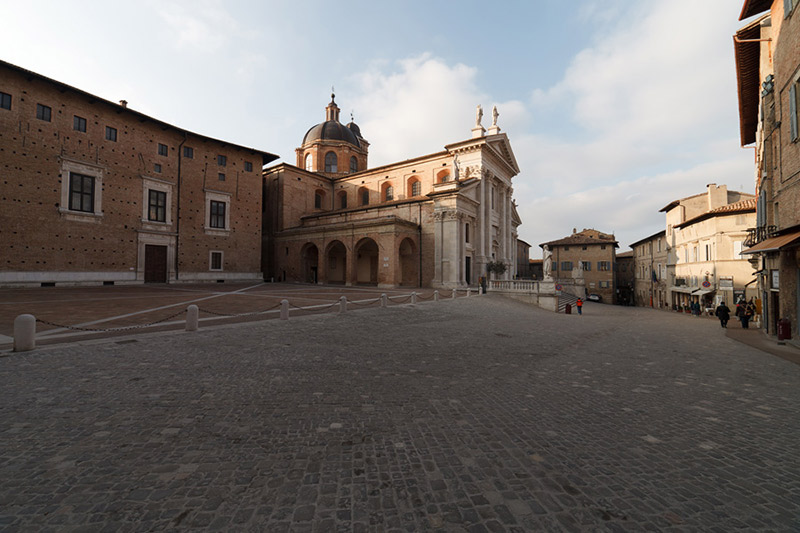 Reading the motivation that leads UNESCO to include Urbino between the World’s Heritage Sites we can understand what makes the city so special: “Urbino had attracted some of the most important artists and humanists of the Renaissance” who, in a short time, were able to make Urbino a model for others European countries.

The city is “gracefully adapted to the landscapes”, a little jewel that shines in the Marche. 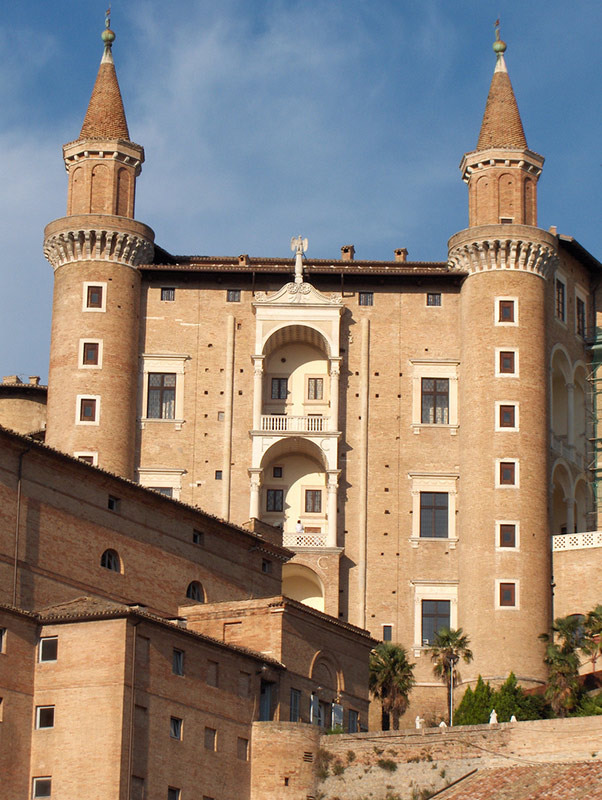 To describe Urbino is mandatory to mention Federico from Montefeltro; duke of Urbino, man of great culture and lover of the arts, he was a patron who transformed his city in the center of the Italian Renaissance.
The Ducal Palace is one of the main examples of that fervid historical period; built in several stages, can be recognized from a distance thanks to the so-called “front of Torricini”, named for the presence of two towers that support the tall and narrow front of the building.

Every elements of the Palace combine practical necessities and aesthetic; one example can be the spiral ramp, built to allow the duke to ride a horse to the top of the building for the main purpose of checking the work of the servants.
Nowadays the ramp, built also as a defensive structure, is used as a venue for cultural events. 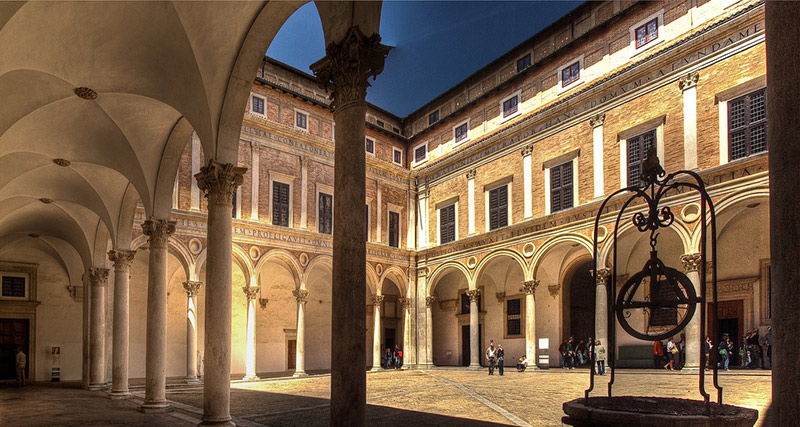 The Ducal Palace is also famous for hosting the National Gallery of the Marche, whose works range from the fourteenth to the seventeenth century: frescoes, paintings, sculptures, carved furniture, tapestries and engravings represent a portion of the works that has revolutionized the prospect, contriving solutions never seen before at that time.

The superb Cortile d’Onore, rectangular shaped and decorated with a well from the seventeenth century introduces visitors to the environments in which they are exhibited works by Piero della Francesca, such as The Flagellation, The Madonna of Senigallia and the painting “Città ideale”, iconic image of the Renaissance attributed to Leon Battista Alberti: this particular picture has the merit of clearly explain the concept of perfection and harmony that had spread in the court of Federico da Montefeltro during the fifteenth century.

During the visit to the gallery we also suggest to admire the two paintings by Raffaello, undoubtedly the most well-known artist from Urbino: here are kept the Portrait of a Lady (also known as La Muta) and the small painting Saint Catherine of Alexandria. 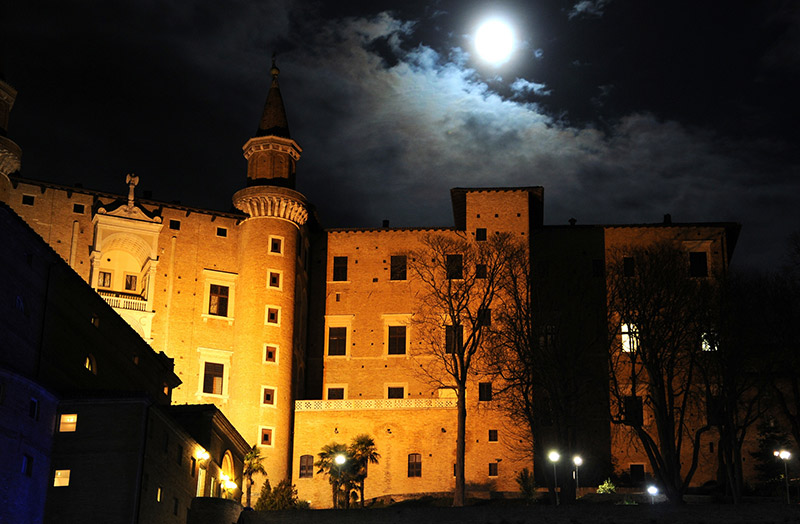 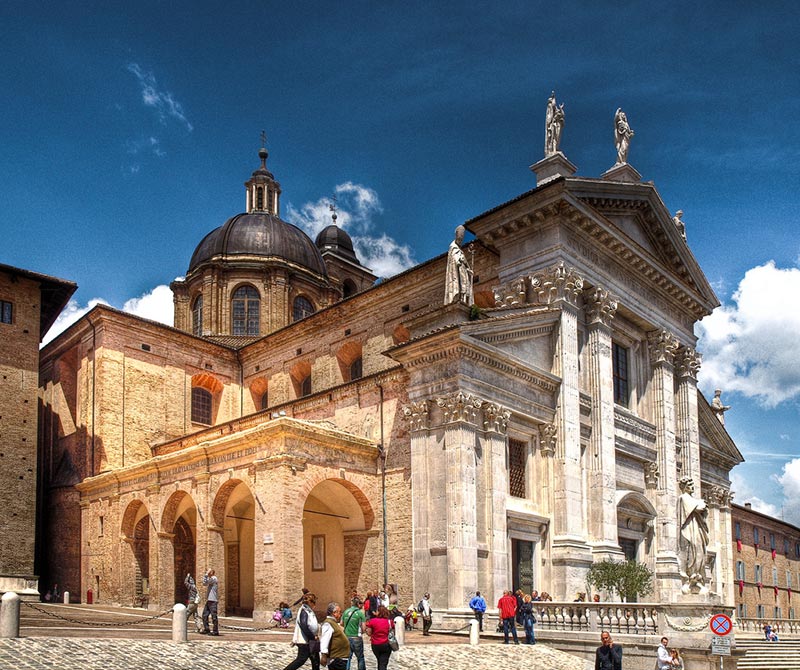 The Duomo is the main church of the city; it was built at the beginning of Nineteenth century by the architect Giuseppe Valadier, who chose the neoclassical style to give a new identity to the cathedral.
At the present days the cathedral is known for the artworks that contains, for example the Martyrdom of St. Sebastian and the Last Supper by Federico Barocci, but its peculiarity lies in the underground; just below the floor is located the Oratory of the Cave, a complex of four chapels that host others notable works including the Pietà sculpted by Giovanni Bandini.

The oratory is still known in Urbino for the Tour of Forgiveness: this peregrination is held in a hallway that the people have to travel several times in prayer during the Easter Monday in order to obtain the Indulgence. 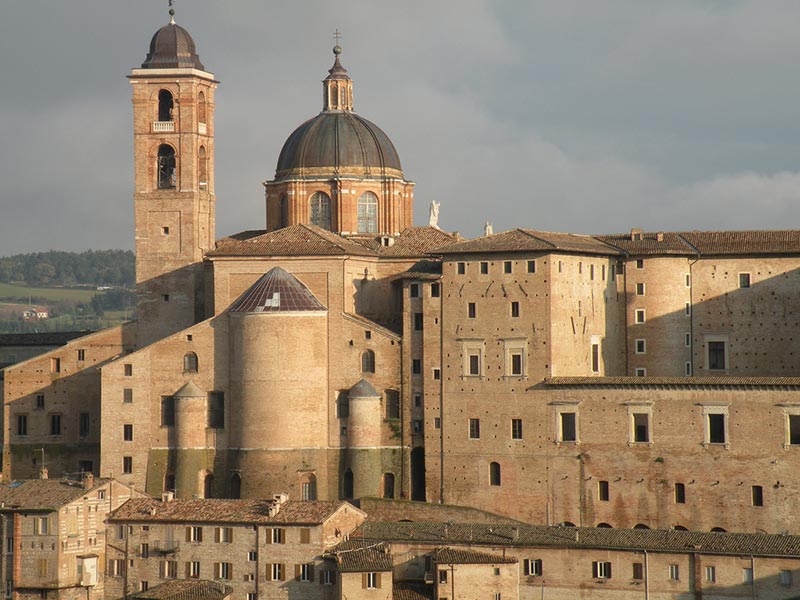 How to pay tribute to Raffaello, one of the greatest geniuses of the Italian Renaissance? The answer is simple: visit the house where he was born in 1483, now a museum and headquarters of the Raffaello Academy.
In this house you can see closely the shop of Raffaello’s father, Giovanni Santi, painter and poet, discover the early paintings of the great artist including the Madonna with Child and visit the places where craftsmanship and inspiration came together. 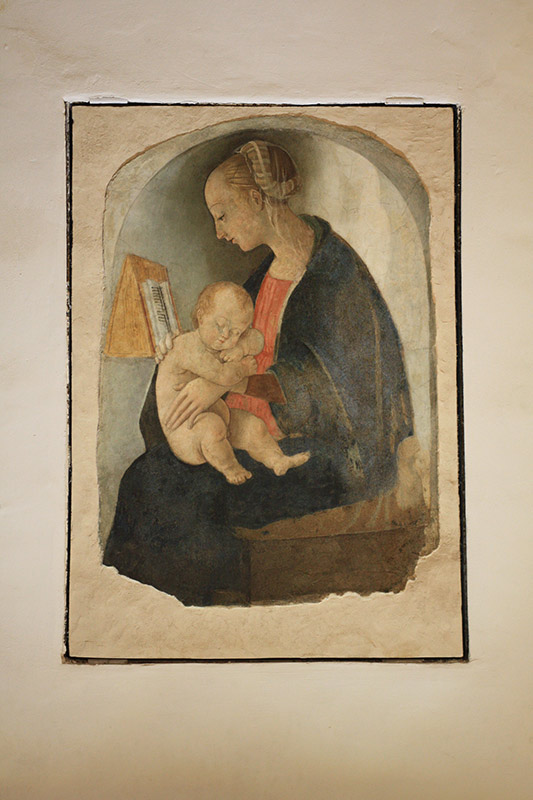 The Academy also holds regular exhibitions of contemporary art in the rooms that once housed the workshop of the Santi house, the original surname of the family. 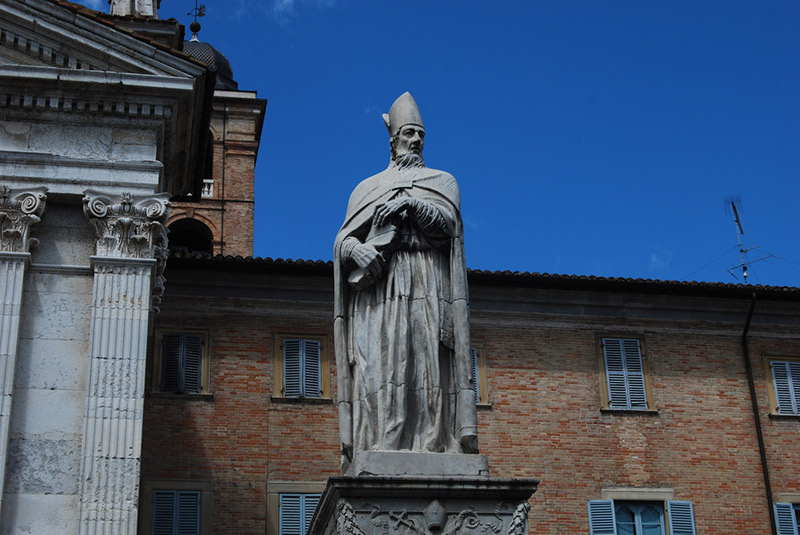 Although Urbino is a small city there are many paths to choose and explore enjoying the scenery: one of the many is the panoramic walkway from Bramanti to Pian Del Monte, street that stretches along the city walls and ends near the Albornoz Fortress, the highest point of Urbino. 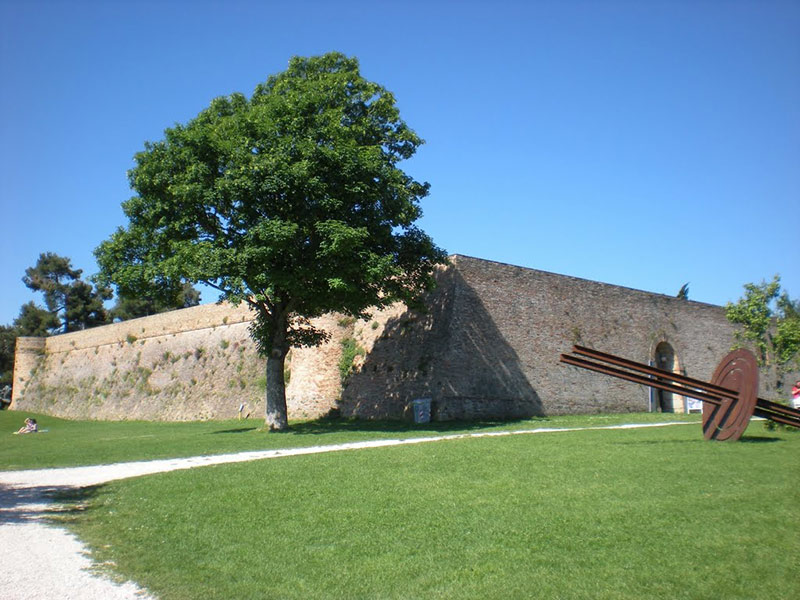 The Albornoz Fortress has been rebuilt several times and, from an outpost for defensive purposes, has become a place that evokes the role of Urbino within Italian history, as a jewel to be preserved and protected, a precious stone set in the hills of Marche.

Inside the castle is located the didactic classroom Bella Gerit, venue of a collection of weapons and armors of the fifteenth century.

After the stop at the Fortress, the tour continues in the historic center of Urbino, where there is singular monument that contrasts with the harmonious style that we have described so far: it’s the Egyptian obelisk placed in the Renaissance Square, in front of the Church of San Domenico. 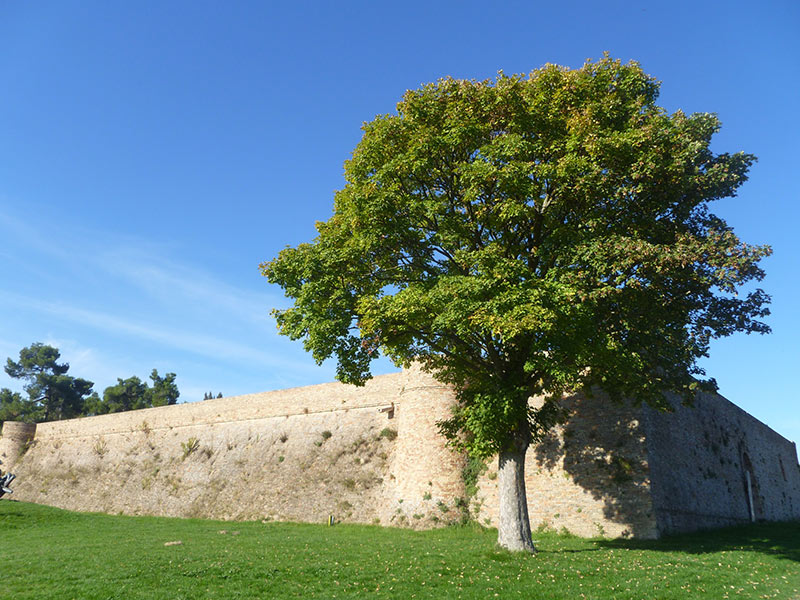 There are only twelve Egyptian obelisks in Italy and the reason why one of them is ended up here is interesting: in the eighteenth century, in Italy had flourished the cult of archaeological finds. The obelisk, consisting of five blocks of red granite of Aswan, was brought to Rome and then forgotten for over a thousand years.

The Cardinal Albani wanted to donate it to Urbino in 1737, and since then the red obelisk has become one of the treasures of the city, though less well known compared to other monuments.

Facts worth knowing about Urbino

Urbino is characterized by numerous alleys, steep roads and cobblestone stairways, so it’s wise to be prepared to walk a lot and deal with some hard climbs.

Some roads are even equipped with handrails, a thing that often surprises tourists visiting for the first time. One of the steepest streets is Via Raffaello, which is also the birthplace of the homonymous painter, and is known by the locals as Mount Urbino for reasons the reader can imagine. 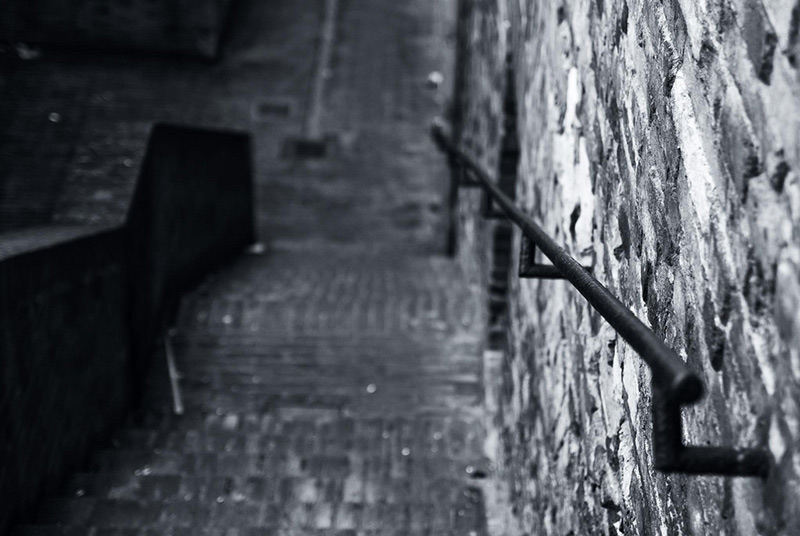 What are the most important events in Urbino? 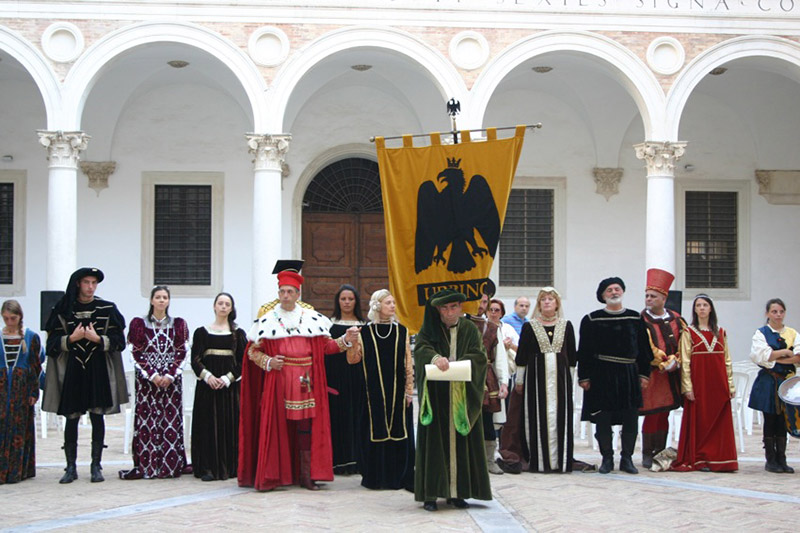 The centuries-old traditions are the heart of cities such as Urbino, once villages that have evolved without forgetting the importance of rites and celebrations.
Every summer, for example, is held the Festival of Ancient Music, an event born almost 50 years ago to promote sacred music and masterpieces of Renaissance in the magical setting of the theater Sanzio. The Italian Foundation for Ancient music invites every year musicians of international fame staging performances unique in its own kind.

In August (15-17 August), occurs the Feast of the Duke, a reenactment that pays homage to Federico from Montefeltro, the patron who has made Urbino big.

For three days you can relive the feeling of being a guest at the court of the duke at the side of figures that interpret blacksmiths, soldiers, blacksmiths, jugglers and musicians.
Watching the historical parades, theatrical shows and jugglers performances is the easiest way to appreciate the local traditions.

The first Sunday of September there is an event that combines the competitive spirit with fun, the Kite Festival (Festa dell’Aquilone), a competition between city districts involving adults and kids.

The winner is the one who can raise is handmade kite higher than anyone and, at the end of the competition, there is a town dinner under the torricini of the Ducal Palace

Giovanni Pascoli dedicated one of his first poems, The Kite, especially for this festival, in memory of his childhood in Urbino.

What to eat in Urbino: gourmet edition 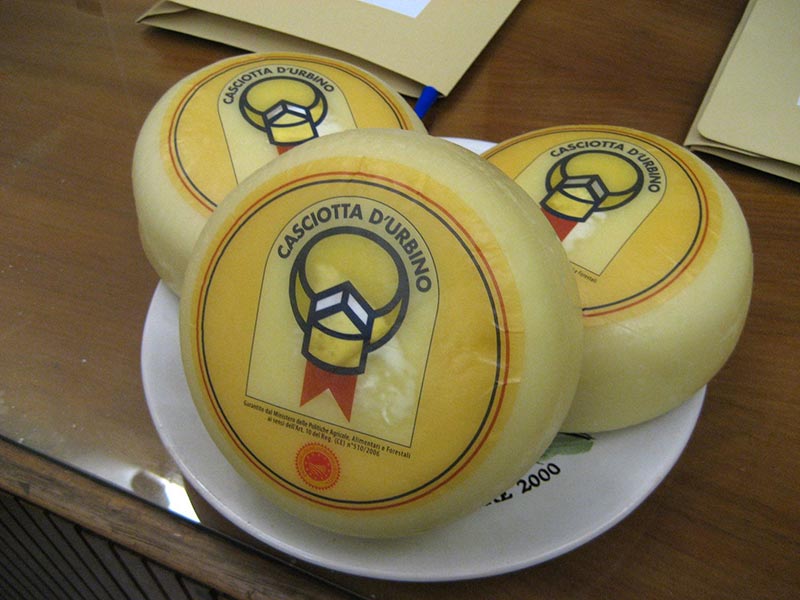 In the Marche there are lots of strong aromas, as a result of a unique geographical location (between the Adriatic Sea and the Apennine Mountains).

Products can be enjoyed in restaurants or buy in the shops to take home. Cheese, meat, mushrooms and truffles dominate the culinary landscape of Urbino: you can start from Casciotta, PDO cheese produced since the sixteenth century with part of whole sheep’s milk and part cow’s. It is said that the Casciotta was Michelangelo’s favorite cheese.

The ham of Carpegna (PDO) is produced instead in the province of Pesaro, in an area rich in natural pastures and totally uncontaminated.

It’s sweet to the taste and it goes beautifully with bread, and fruit or vegetable salads; you will easily find it in restaurants and shops in the Urbino area.

Lastly, in our gastronomic journey should be mentioned Crescia, a focaccia and in other words, the street food par excellence, a close relative of piadina and at the same time different in taste and shape.
This “bread”, usually homemade cooked, is common since the fifteenth century and is usually eaten stuffed with sausage, herbs, pork loin, ham or cheese. 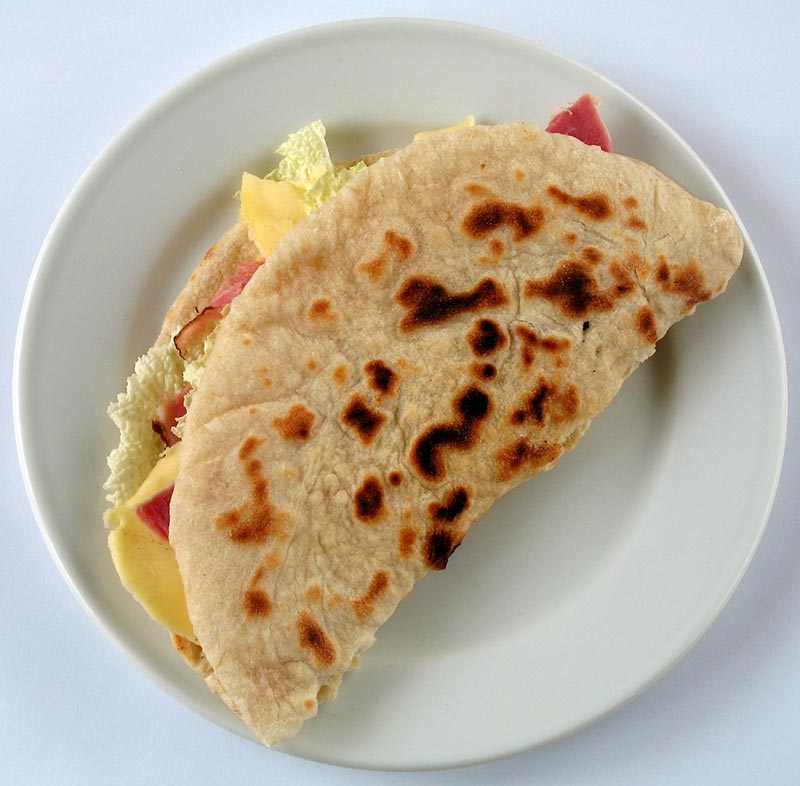 To find out the most elaborate dishes of Urbino’s tradition, such as tagliatelle with truffles, we recommend La Taverna degli Artisti, in 52 Bramante Street, a restaurant that has a menu with all the dishes of the Marche cuisine and great value for money.

This restaurant, located right in the city center has a frescoed ceiling and it’s a cozy place for those who seek fine and genuine food and wants to chill italian style.

Where to buy local products in Urbino 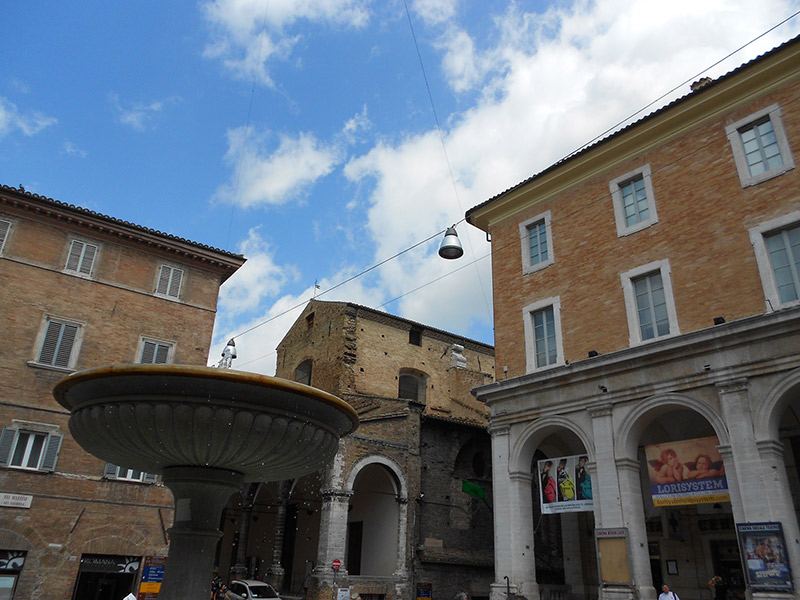 In Piazza Repubblica, hosted by the Collegio Raffaello, you’ll find the shops of Montefeltro, stores specialized in local excellence: here you can find pottery, wine, cheese, truffles, oils and of course the famous crescia.
Everything needed for those who want to buy more than just a souvenir. Here are the best products of a fortunate land that has not forgotten the value of craftsmanship.

What are you waiting for to discover the wonders that Urbino has to show?