(“Among us, only Siena is home to courtesy”)

Traveling to Siena is an experience you’ll never forget: the colors of its squares, of its
palaces and churches are in complete harmony with the bright hues of the natural landscape; the
beauty of its monuments is rubbed into people minds and the fragrances of culinary delights
stimulate their appetite.

This travel diary is an invitation to discover the Palio city, a story made of different steps
that includes the most famous attractions, the main historical information, pieces of advice on what to do during your holiday and some tidbits for the most curious travelers. 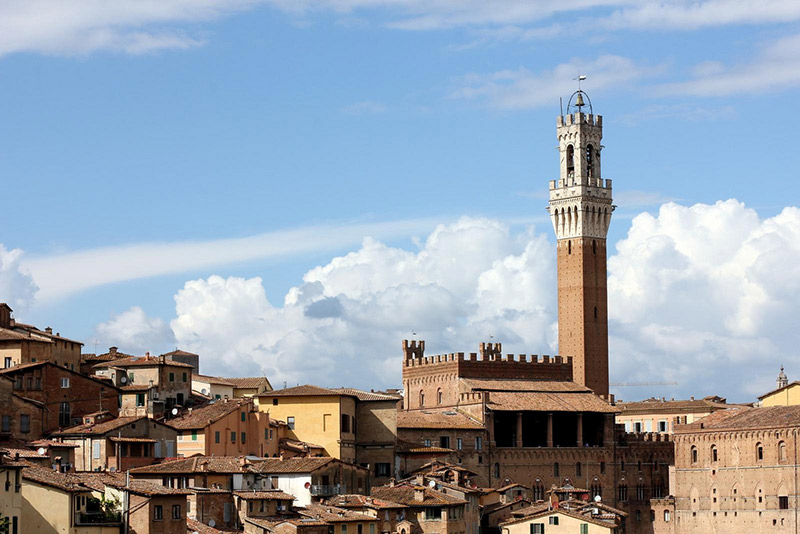 This town has kept the architectural style of its medieval historic center intact and eagerly honors the traditions associated with the Palio: this is why UNESCO declared the center of Siena a World Heritage Site, naming it “a masterpiece of dedication and fruitfulness.” 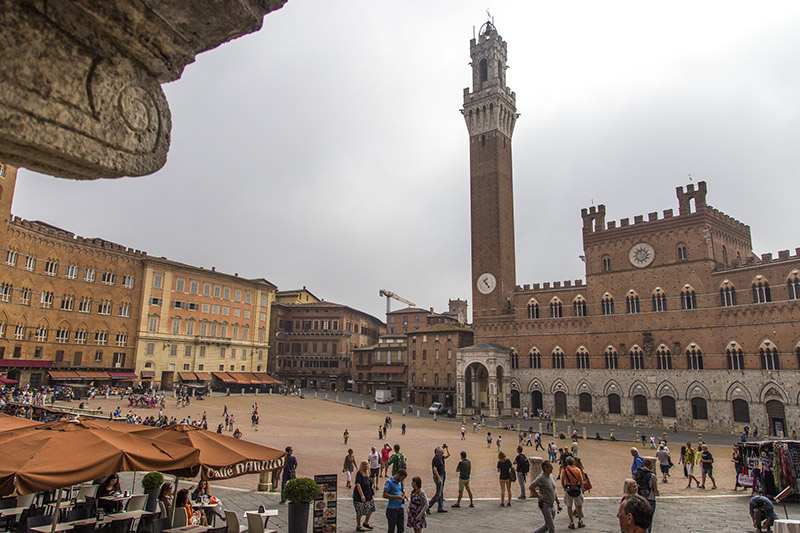 Piazza del Campo is the most well-known Sienese spot and it is usually the starting point of each tourist itinerary: it has the shape of a shell, twice a year it hosts the Palio and it is the only part of the city center, along with the Palazzo Pubblico, not to belong to any contrada ( the ancient name for “district”).

The Palazzo Pubblico is also known as the City Hall, since the fourteenth century it has hosted the city government headquarter and testified Sienese sublime medieval art thanks to its inner frescos, sculptures and paintings belonging to the greatest Sienese artists of the fourteenth century.

It now treasures the municipal administration offices, the Civic Museum and the Teatro dei Rinnovati.

Among the works displayed in the Museum, I suggest in particular Simone Martini’s Maestà (Majesty) in the Sala del Mappamondo (Globe Hall) and Ambrogio Lorenzetti’s frescoed cycle Effetti del Buono e del Cattivo Governo (Effect of the Good and Bad Government), considered among the greatest masterpieces of the Sienese art.

The Teatro dei Rinnovati, located on the first floor, is one of the most important stages of the entire
Tuscany and offers a calendar full of performances ranging from dance to drama, from opera to classical music concerts. 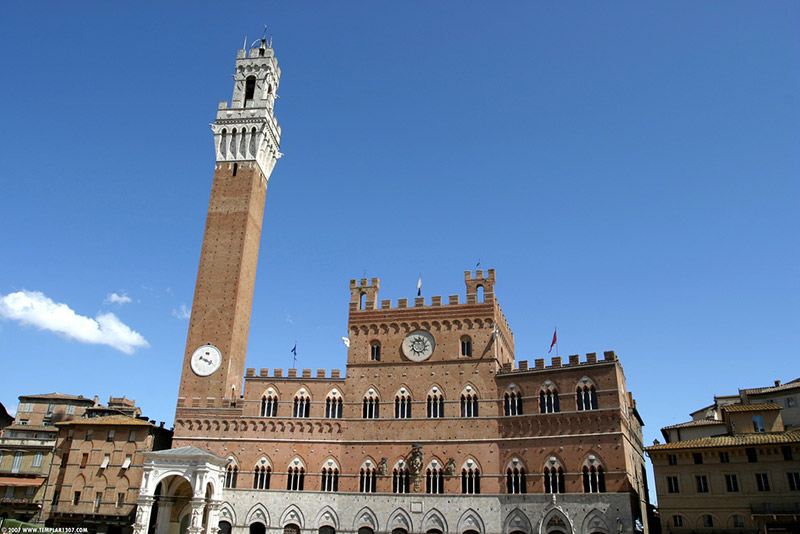 Next to the Palazzo Pubblico there is one of the symbols of Siena, the Torre del Mangia, built in a later time (between 1325 and 1348) and named after one of the first guardians of the Tower, Giovanni Balducci known as “il Mangia” (“the Eat-it-all”) because of his habit of squandering his money in food.

Out of curiosity: Assigning nicknames to famous people is one of Siena peculiarities: every jockey taking part in the Palio in fact has a nickname given to him by the district in which he makes his debut. 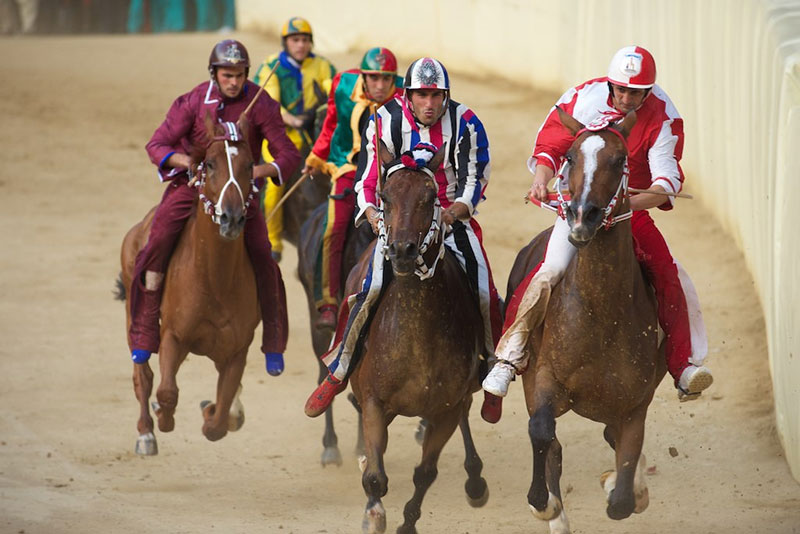 When does the Palio takes place?

The Palio takes place on two dates: July, 2 and August, 16, the first one honoring the Provenzano Madonna, the second honoring Virgin Mary’s Assumption.

Attending the Palio from the inside of Piazza del Campo is free, but, in order to follow the race
from the stage, the windows and the terraces, you have to buy a ticket, and it is better if you do it in advance. 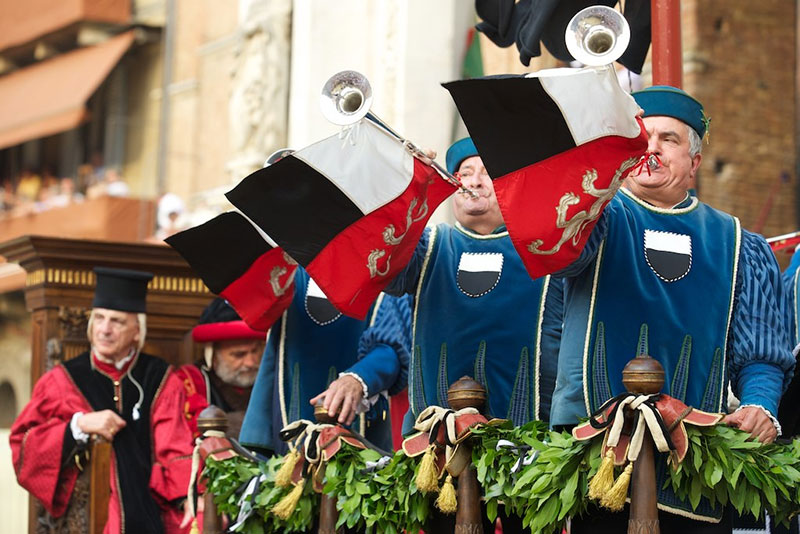 To fully appreciate this visit and to end it at its best, you cannot miss the top of the tower panorama: from here you can gaze out at the magnificent churches of the old town and at the countryside that surrounds Siena in a romantic hug.

A useful piece of information: if you want to reach the top of the tower, it is necessary to climb more than 400 steps… but the panorama you’ll see from here is totally worth it.

After having seen this charming city from above, it is time to get down again and to carry on the itinerary from its starting point. 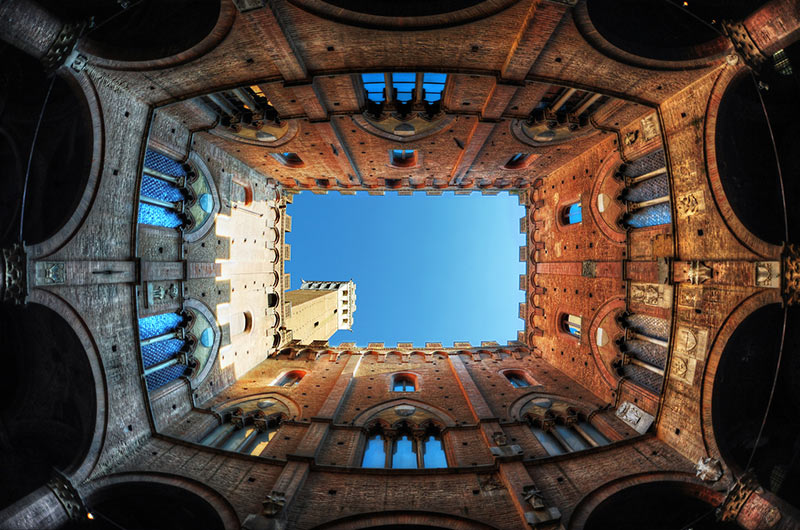 Piazza del Campo is considered the symbol of the Sienese elegant beauty because of its
architectural integrity. Moreover, it is from here that originate the streets dividing the city into different areas, known with the name of Terzi.

Would you like to know which are the must-seen spots in each Terzo? We have prepared a handful itinerary for you, to follow in complete relax.

The Terzo di Città is the tallest and most ancient part of Siena: the legend says that in 700 b.C. Remo’s sons, Senio and Ascanio, after having fled away from Rome, arrived in Siena and, together with some shepherds, founded the first settlement of the city.

This explains the origin of the name Siena and the presence of the she-wolf on one of the ancient city emblems.

In this area you can visit the Duomo and Santa Maria della Scala museum complex. 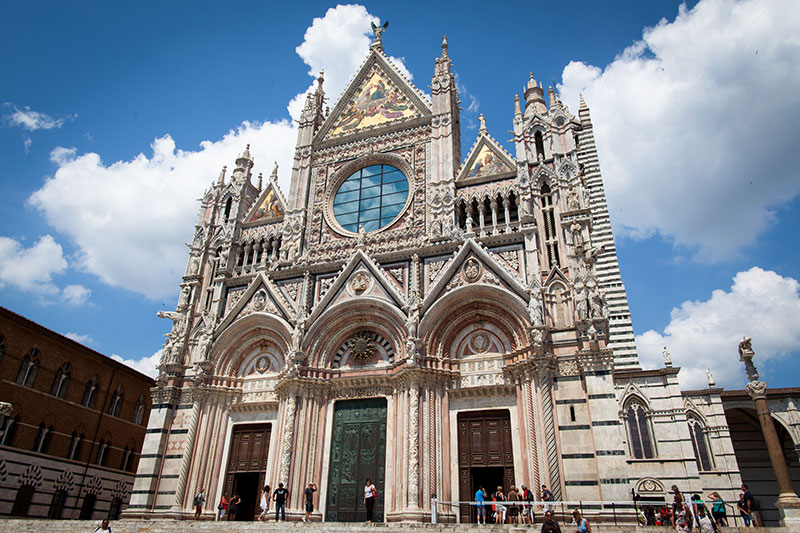 The Cathedral was built in a Romanesque-Gothic style and exhibits an external façade dominated by a series of astonishing Gothic statues portraying prophets, patriarchs, pagan philosophers
and Prophetesses. 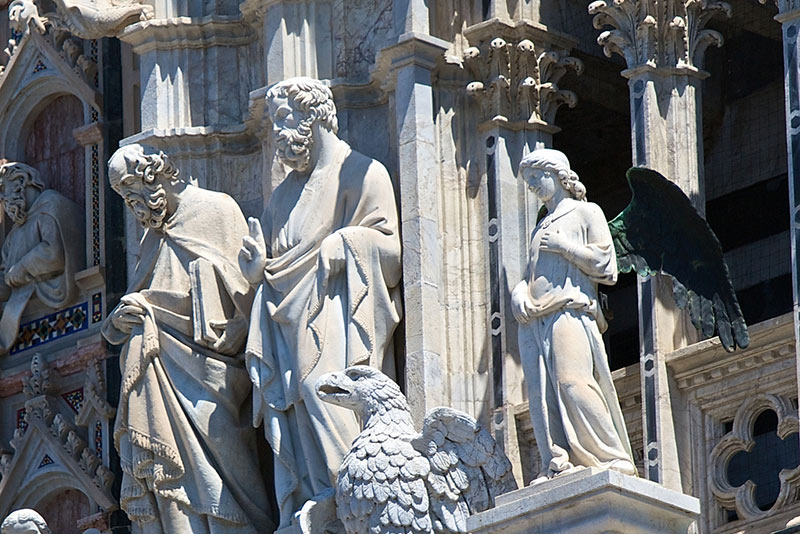 The Duomo interior keeps some of the most precious treasures of Siena: the floor, for instance, was known as a “Bible for Images”, made up of 56 panels of inlaid marble and graffiti and signed by great artists such as Matteo di Giovanni and Domenico Beccafumi, while down the aisle there are Piccolomini’s Alter and Library.

The latter has never kept the books for which it was firstly built (I.e., Pope Pius II’s collection) and it is fully decorated with Pinturicchio’s frescos, who was helped in his work by young Raffaello Sanzio. 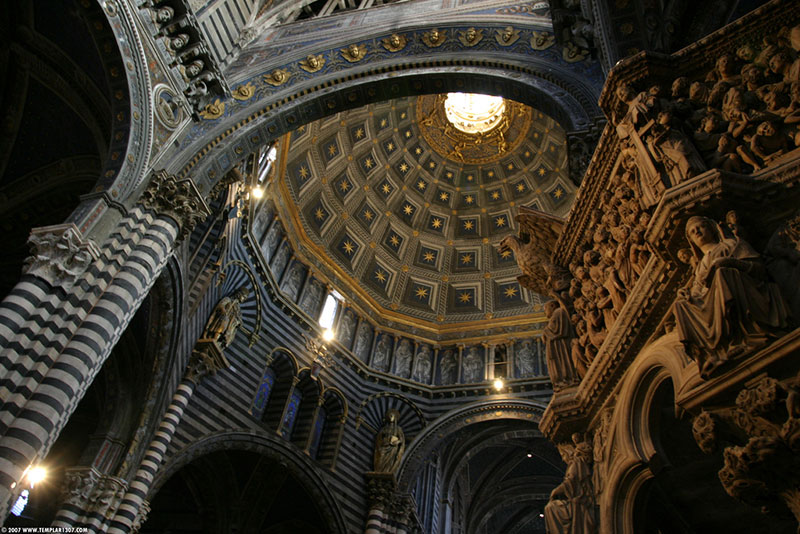 Santa Maria della Scala was one of the oldest hospitals worldwide: here, the pilgrims heading to Rome were nursed and looked after; today, it has turned into an exhibition center, treasuring archaeological and contemporary masterpieces.

To put it in other words, a time-travel in the history of art. 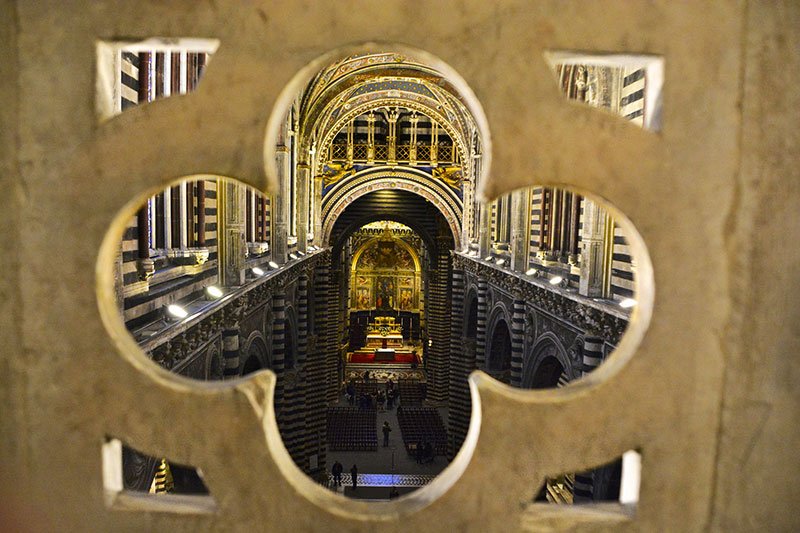 Depending on the time of the year, it is possible to attend exhibitions, special events, conferences and workshops for children.
The archaeological museum is located in the basement, inside a maze made of rooms and tunnels dug out from the tuff a literal dive into the past! 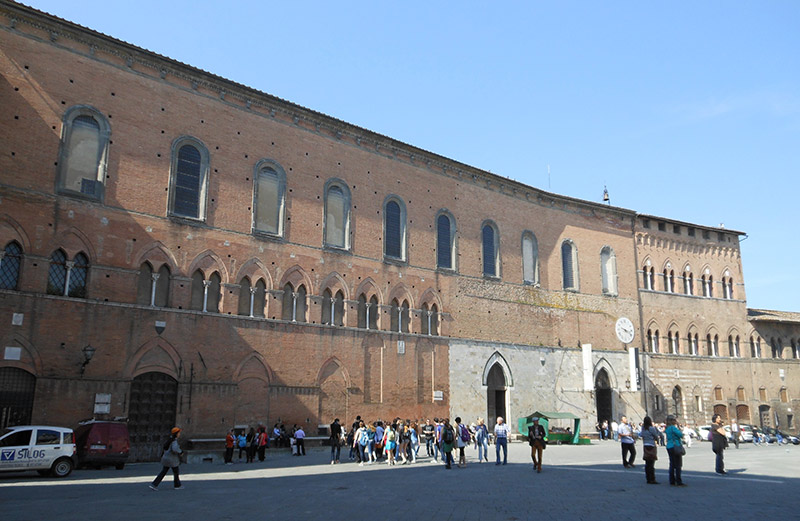 The Terzo di Camollia corresponds to the northern part of the city and it is also known as Porta Camollia, once the Sienese most guarded entry point.

“Cor magis tibi Sena pandit” is the Latin inscription visible on the door, it means “Siena opens her big heart to you” and refers to the Sienese hospitality, an important value which has helped the city in becoming a tourist destination always fashionable. 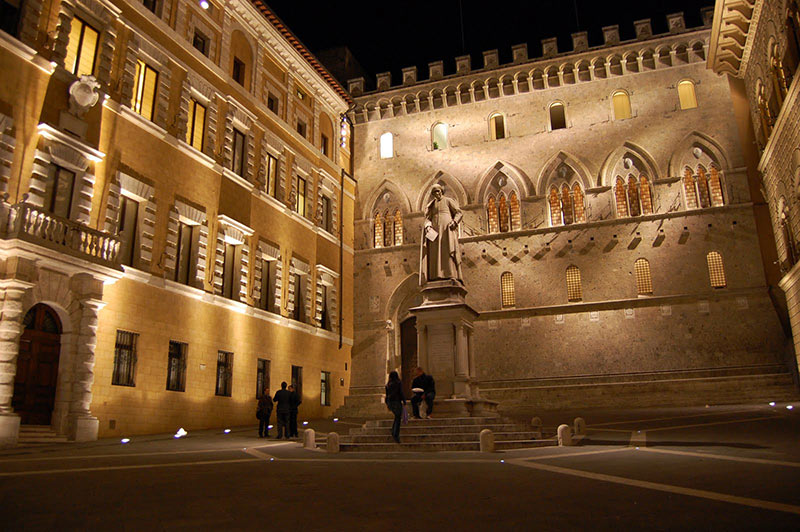 By walking along Via Banchi di Sopra, one of the most elegant streets of Siena, you’ll reach
a fascinating square, Piazza Salimbeni: the homonymous palace, located on a corner of the square, was the residence of the Salimbeni family, wealthy merchants extremely important and powerful until the fourteenth century.

At the end of Via Camollia, turn right to enter the Giardini La Lizza, the largest public park
of the city, the ideal place for a relaxing break before heading right opposite from you to the Medicea Fortress, a place that harmoniously blends past and present together. 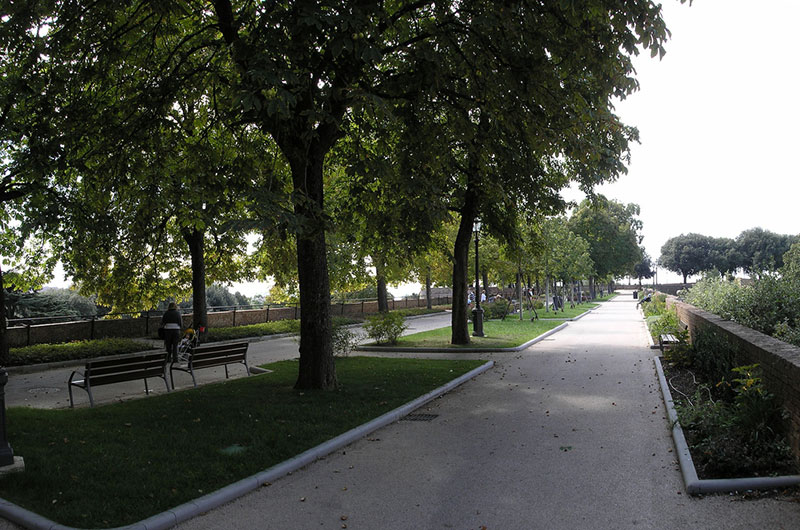 This sixteenth century fortress, in fact, was once a military outpost and now it protects some of the most exquisite Sienese excellences. This is testified by the fact that its anterior rampart basement hosts the Enoteca Italiana. 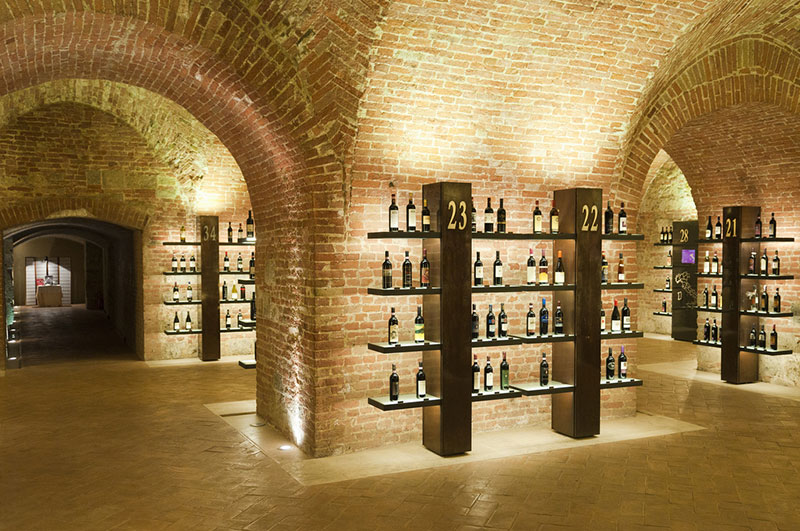 I am referring to the national body for the promotion and enhancement of the best Italian wines,
the perfect place where to learn more about the DOC and DOCG wines and where to taste Tuscan delicacies at the restaurant Millevini.

Inside the Enoteca you can buy bottles, taste the wines recommended by expert sommeliers and participate in meetings and courses focused on some products carefully selected by a
strict jury: only quality-certified wines are allowed to be part of the Enoteca collection. 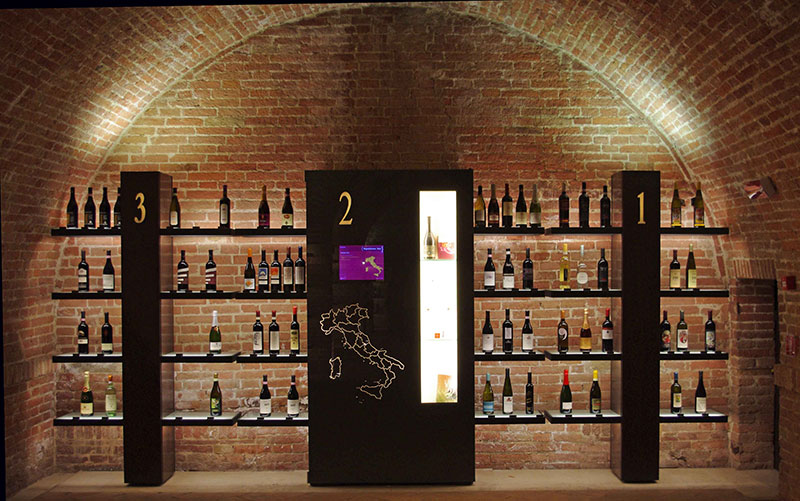 The Terzo di San Martino occupies the south-eastern area and it is built around Via Francigena, the route followed by the pilgrims headed to Rome. St. Martin is the travelers patron and this explains why the area has such a name.

The suggested route includes places extremely different one to the other: its aim is to show Siena many faces, which, although different, never fail to surprise and excite, even after countless visits.
The Basilica of Santa Maria dei Servi is a church extremely rich with works of art, including Coppo di Marcovaldo’s Madonna del Bordone.

There is an interesting anecdote about this picture: the author painted it in exchange for his freedom when he was taken prisoner in the Montaperti battle.

The Renaissance, as you know, had its greatest exponents in Tuscany and, as you may imagine, also in Siena there are some evidences of that unique period: Palazzo Piccolomini, for instance, where the State Archives and the Museum of Biccherna tablets are kept.

The Biccherna was once the Sienese magistrature, active from the XII to the XVIII century: its tablets were painted with religious scenes and were made specifically to bind accounting books.
There are many ways to tell a story and evoke intense emotions: in Siena you’ll discover that the language of art is truly universal.

A travel in such a beautiful place would not be complete without a little shopping… then,
why not ending the tour in a store that is also an art gallery? 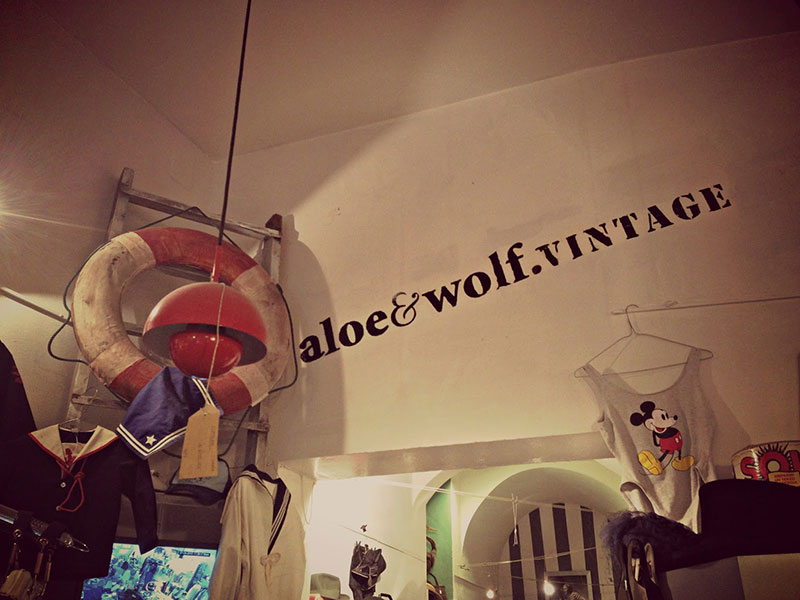 In Via del Porrione 23, in the Terzo di San Martino, there is Aloe & Wolf, which is specialized in clothing, accessories and vintage furniture.

It is a store that regularly hosts exhibitions
and parties, another proof of how the Palio city stimulates creativity and encourages the experimentation of original solutions. 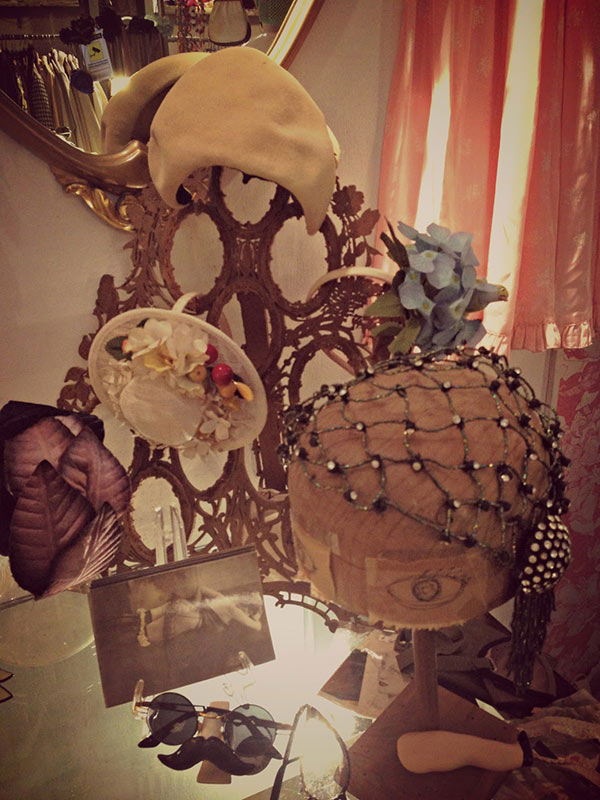 The Sienese gastronomy is inseparable from its other attractions because of the authenticity and simplicity of its recipes, the inimitable flavors of its local products and its talented chefs that have here improved their skills to provide customers with mouth-watering dishes and original menus.

An overview of what is better to taste in Siena is a further call to plan a holiday here: whether it is only for one weekend or a longer stay, don’t forget to try the typical plates of the Sienese cuisine.

Dishes belonging to peasant traditions are among the healthiest, nutritious and tasty in the whole food sphere. Ribollita is an example of poor cuisine: it is a soup of stale bread and vegetables, called this way because it used to be cooked in huge quantities and, in the following days, boiled more than once in a pan. 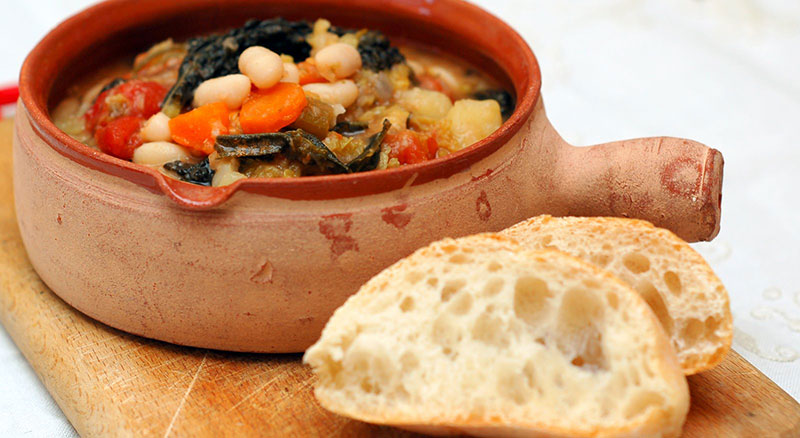 If compared to other soups, the ingredients that stand out in this recipe are the black cabbage and the beans. Don’t leave out the tiny yet essential dressing details: a drizzle of extra virgin olive oil and a baby onion to slice directly on the soup. 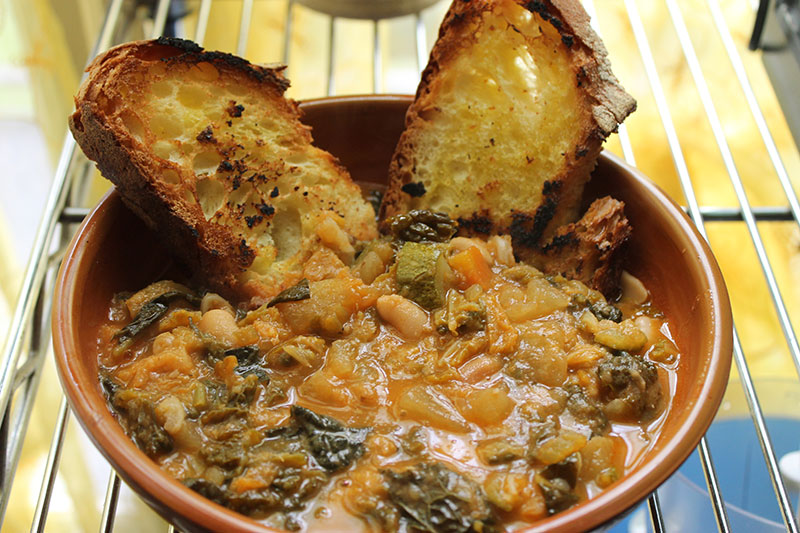 Pasta is a must in a typical Italian menu and once tried Pici you’ll never be able to live without it: it is a kind of pasta that resembles to thick spaghetti made with wheat flour.

One of the recipes most loved by the people of Siena is the Pici all’Aglione, a sauce made with
4 cloves of garlic, chili and 4 chopped tomatoes. 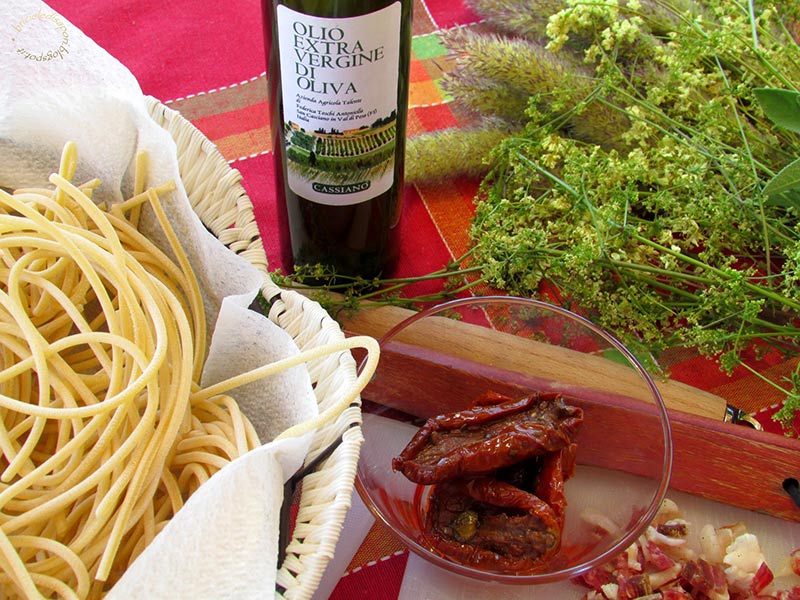 All the leading Sienese restaurants and trattorias have this dish on their menus, and you can buy
fresh Pici in the local pasta shops, and take back with you a yummy souvenir.

The baking tradition is equally abundant and the dessert symbol of Siena is probably Panforte, originally associated with Christmas and now available all year long in pastries and
restaurants. 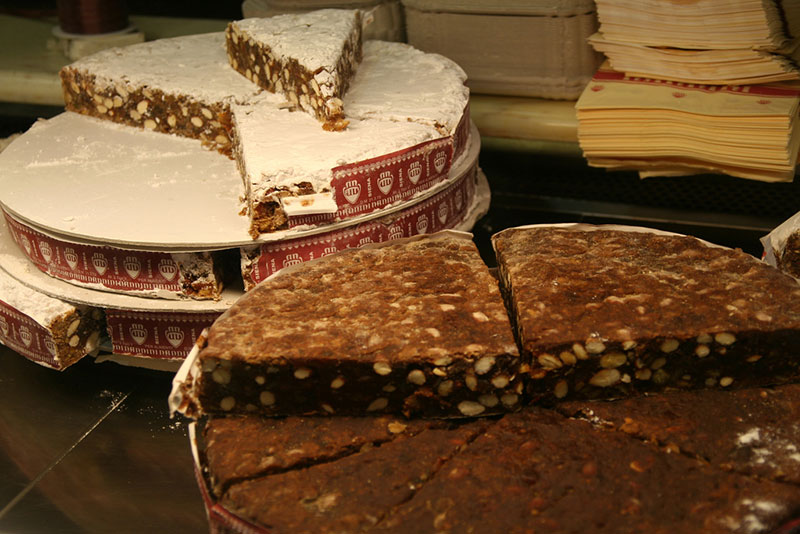 Cedar, almond, orange and other spices are Panforte basic ingredients, a delight that has accompanied Siena historical events of the XIII century.

Are you now eager to experience for real these Sienese wonders? Be careful: always bring a smile with you… in Siena it will be given back to you for sure!