Religious tourism is a phenomenon that affects many destinations in Italy and involves both the pilgrims as tourists in the strict sense.
The pilgrim follows an ancient path, which winds between churches, shrines, cloisters and other holy places, while religious tourists usually visit different sacred sites and staying longer in the destinations selected.

Rome is a must-see for this kind of tourism, since it is the center of Christianity: here you can admire many works of art and to visit unique places in the world, so I followed a religious-themed route that I suggest to everyone want to make a journey through time in the Eternal City.

I started my walking tour from St. Peter’s Square, in the heart of Vatican City, the place where is located Savelli Religious, a brand specialized in religious articles since 1898 which is still a landmark for people who want to buy precious gifts made with meticulous attention to detail.
The Savelli shop shows the importance of tradition and the constant pursuit of beauty inherent in sacred art.
This is where stands the St. Peter’s Basilica, the largest of the four papal basilicas of Rome and the first stage of this spiritual path. 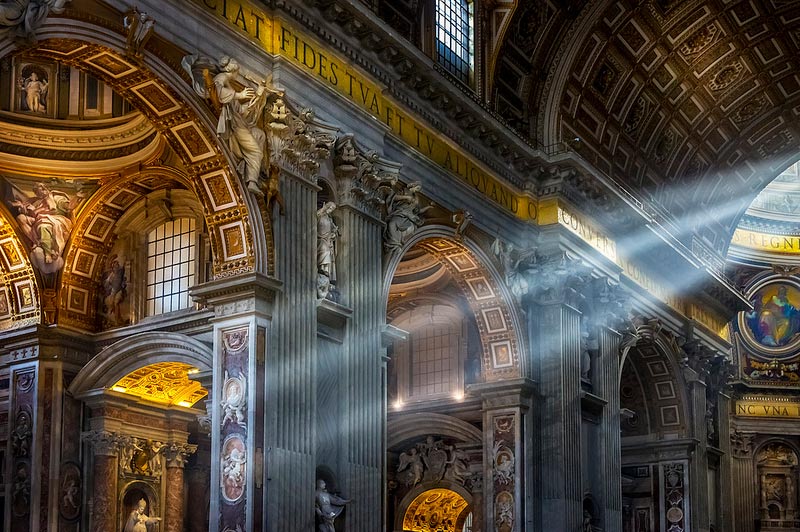 Enter to St. Peter’s Basilica means beginning a path of contemplation of beauty, leaving overwhelmed by the majesty of the church, designed by the greatest artists of all time, such as Michelangelo, Bernini, Raphael and Bramante, who have worked here in different periods, included between1506 and 1626.

The best way to visit the Basilica and appreciate the masterpieces preserved here is to book an audio guide or a guided tour with qualified personnel, able to tell the origin of this place from the unchangeable fascination, avoiding the classical descriptions that can be found on the books.

Those who went for the first time in this Basilica is speechless in front of the Pietà by Michelangelo Buonarroti, the first major work created by the genius of the Renaissance; however, it is the Dome, called by the Romans “il Cupolone”, the symbol of the city that impressed me for its astounding beauty.
It is interesting to know that Michelangelo worked there until his death, and that the architectural profile of the Dome has changed, going from Renaissance to Baroque influences, because of the intervention of Carlo Maderno, who finished the work in the early XVII century.

St. Paul’s Within the Walls 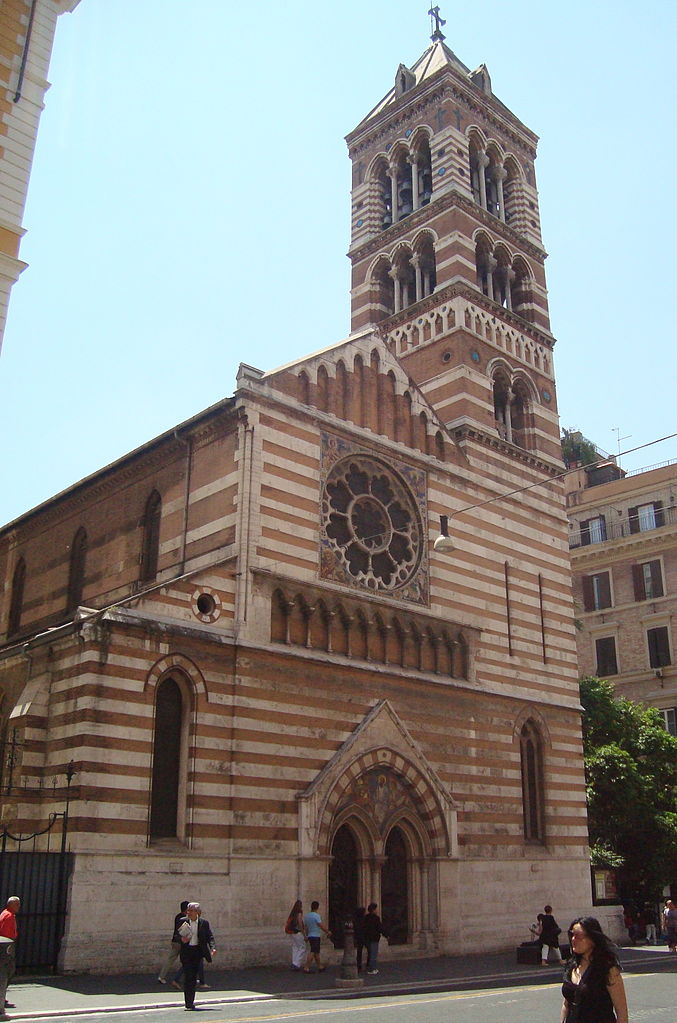 In apparent contrast to the St. Peter’s Basilica, the second sacred place I visited is S.t Paul’s Within the Walls, located at Via Nazionale, a short walk from Termini Station.

This isn’t one of the most popular churches, because it was built in 1873 and is the first non-Catholic church to have been built after the unification of Italy.
It’s also known, in fact, as the American Church in Rome.
The architectural style is Romanesque-Gothic and the red bricks that alternate with travertine marble on the facade make it immediately recognizable when walking in Via Nazionale.

A singular characteristic of the mosaics inside deserves to be told: the faces of the saints have the appearance of some of the XIX century historical figures.
Have fun recognizing Garibaldi in the features of San Giacomo, Abraham Lincoln in the face of Saint Andrew and General Grant in the features of Saint Patrick.

The other reason to visit this church is the scheduling of evening concerts (sacred music, gospel, spirituals and more), a nice occasion to attend a live event in a very unique venue.
The website of the church, where you can check the programming of concerts, is this: www.stpaulsrome.it. 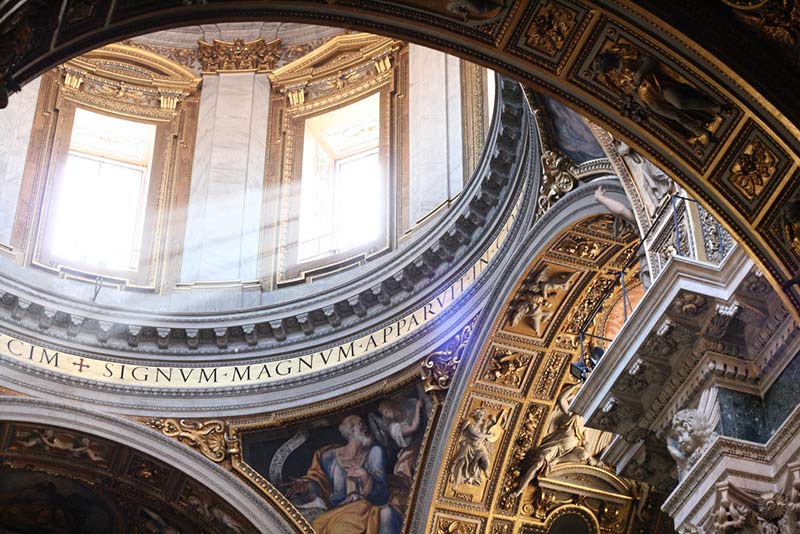 Continuing by walk, I reached the Basilica of Santa Maria Maggiore, in the Esquilino area, the only one of the papal basilicas which has kept the Paleo Christian structure.

The most important aspects of this church are the V century mosaics, the floor and wooden ceiling dating from the XVI century, works of art that bear witness to the great importance of this Basilica in the history of Christianity.
If you like legends and rituals, I recommend you to visit the Basilica on August 5th, when the “miracle of the snow” happens.
It is said that the Virgin Mary appeared in a dream to Pope Liberius on the night of 5th August 356, inviting him to build a church in the place where he would find snow in the morning.
The miracle occurred and, every year, that event is celebrated with a cascade of white petals inside the Basilica.

A celebration undoubtedly impressive and exciting to attend.

Sacred places to be seen on the Via Appia 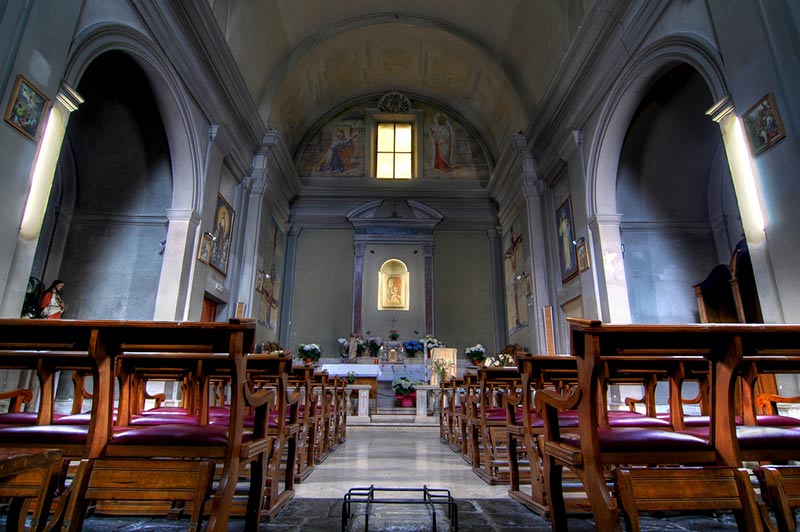 Rome isn’t only made by its historic center and its most prestigious monuments: there is much to see along the Via Appia, called “the queen of the long roads” at the time of the ancient Romans.

To really get the many attractions of the Eternal City, I chose to go along part of the Appian Way, crossing the Caffarella Park, one of the “green lungs” of the city, ideal to explore by bike.

Here rises the Church of Domine Quo Vadis (known also as Church of St Mary in Palmis), whose name in Latin means “Lord, where are you going?”. According to the legend, the apostle Peter met Jesus here, who convinced him to face martyrdom.

This is a small church which houses a marble slab with the imprints of the feet that have been left by Jesus.

After a short break, I went to the Catacombs of Callixtus, which date from the II century and are one of the largest archaeological sites in Rome.
The guided tour I attended was an experience I recommend to everyone: if you are in a group you have to book in advance, otherwise you have to go to the site and join a tour in your own language along with other people. 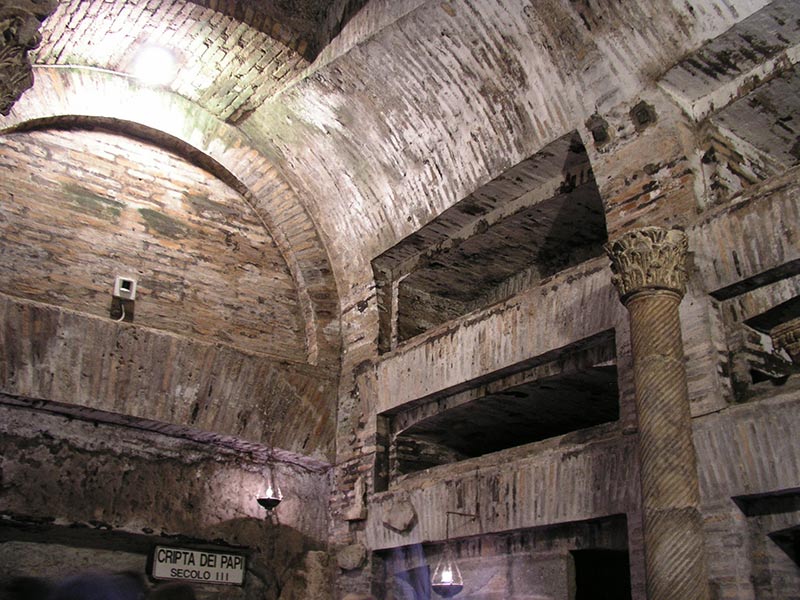 Underground lie buried many Christian martyrs, some frescoes preserved in good condition, the Crypt of St. Cecilia (patron saint of music) and the Crypt of the Popes, also known as “the Little Vatican” contains the tombs of eight popes.

In 45 minutes I made a thrilling journey through the history of the city, so I suggest you to plan in advance your tour in the Catacombs, to have a more complete view of the Christian religion.
Official website of the Catacombs of Callixtus: www.catacombe.roma.it.

Basilica of St. Paul Outside the Walls 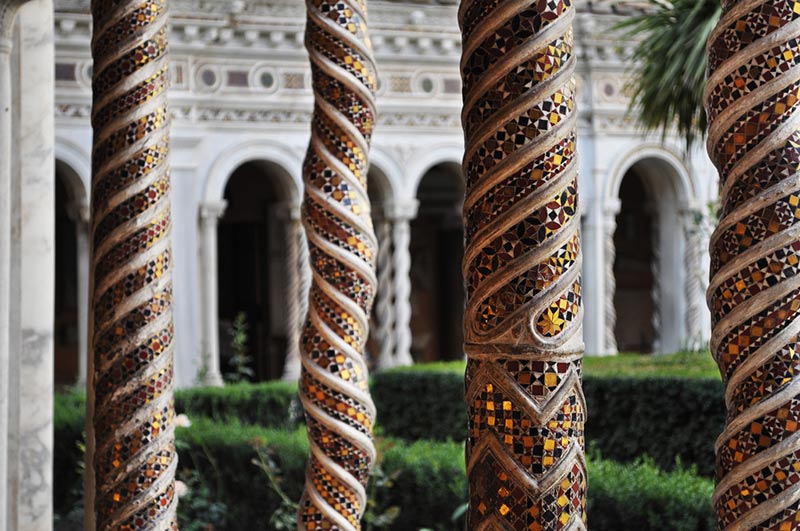 Near the Circus Maximus there is a place, not very well known to tourists, I have achieved during my spiritual journey.
It might seem strange visiting a Municipal Rose Garden as part of a tour of its kind, but I am convinced that many people will be amazed by the variety and beauty of roses in this garden.
You must wait until spring to see it, but it’s worth it: the Rose Garden of Rome gives a stunning view of the Circus Maximus and the Palatine Hill and, inside, you can admire the flowering of 1100 species of roses.

From there I walked to the Basilica of St. Paul Outside the Walls, the final stage of my tour. The decision isn’t accidental, since this is the second largest church in Rome after St. Peter and is the place where it’s supposed that the Apostle Paul would be buried.
Since 1300, year of the first Jubilee, the area has been a pilgrimage destination; the actual Basilica was consecrated in 1854 and underwent a major restoration in 2006. 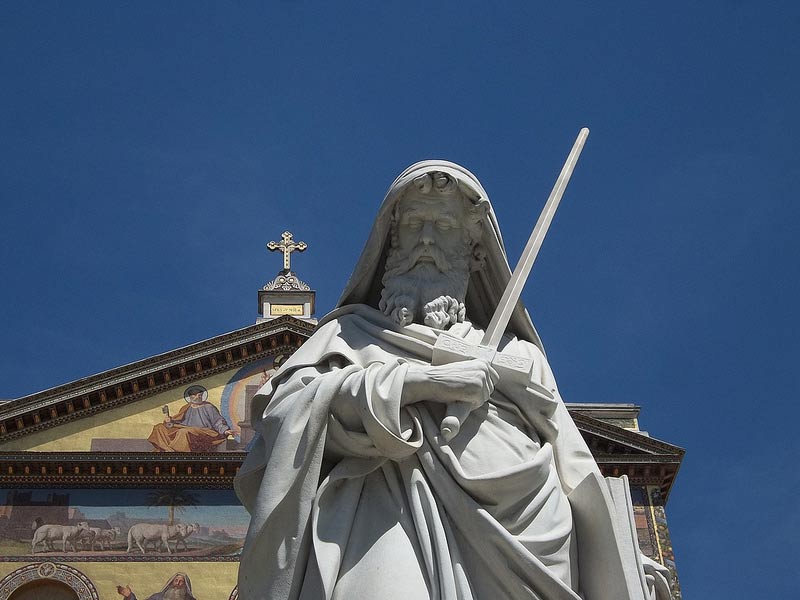 Take the opportunity of a visit to the church to explore even the archaeological site, which contains artifacts dated around the early Middle Ages.
Follow the footsteps of the pilgrims implies greater attention to places visited and a great propensity to so-called “slow tourism”, in other words the preference for more relaxed pace of life in exchange for a fulfilling travel experience, almost a privilege in our era.