It will be a rare piece of footage 15 years in the making: the new year will ring in the release of the Maurizio Cattelan movie, a documentary following, quite frankly, every bizarre move of the quirky Italian artist.

A sunny day in Milan may entice you to take a stroll around its picturesque center. You’ll stumble upon the majestic Duomo, the beautiful Castello Sforzesco, and somewhere in between, in Piazza Affari, you may do a double take.

There amidst the Italian stock exchange, you’ll find an 11 meter high marble sculpture of a hand with a protruding middle finger.
The sculpture, by Maurizio Cattelan, is just one of the many thought-provoking and head-scratching creative pieces this individual has graced the art world with since the 1980’s.

And his shocking antics don’t stop at just flipping the bird. 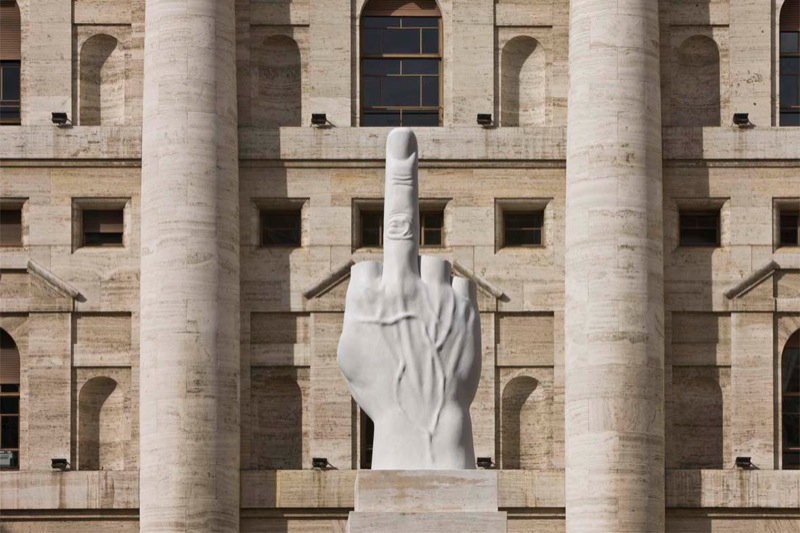 An inside look at Cattelan career 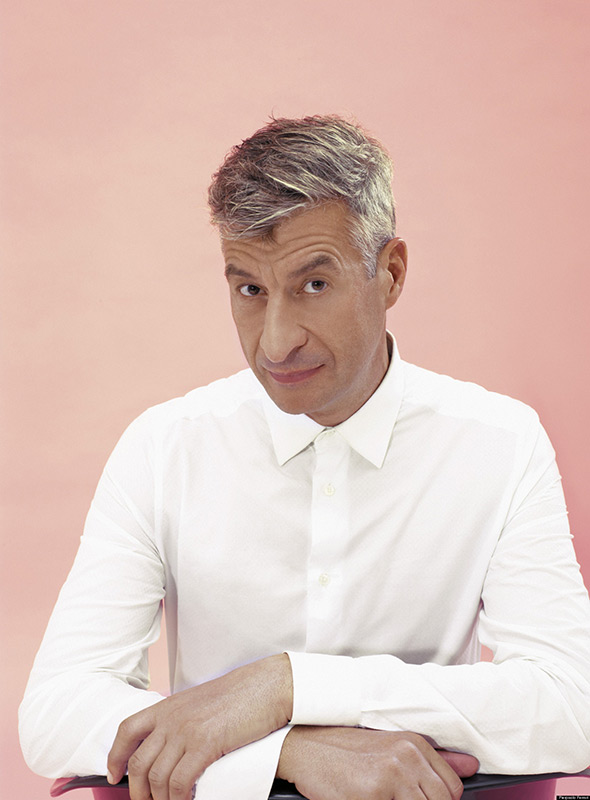 Cattelan surfaced in the art world in the 80’s, beginning his career in Forlì, Italy where he knew some local artists.

A self-taught artist as he claims, he tried his hand at a few odd jobs earlier in life including a gardener, a mortuary attendant, and a designer. It wasn’t until 1990 he found his niche, emerging as a world-renowned artist, known for his satirical sculptures and solo exhibitions around the world.

There is nothing banal, or some would say even appropriate, about his works, however. In fact, his pieces evoke a curious combination of astonishment, amazement and perplexity.
Arguably one of his most controversial pieces was his exhibition at the Guggenheim Museum in New York.

“La Nona Ora” (The Ninth Hour), is a wax figure of Pope John Paul II in full ceremonial garb, struck to the ground with a giant meteor. For Cattelan, however, there was nothing inappropriate or anti-catholic about this piece. In fact, he grew up singing in the church choir.

In a 2005 interview with Sculpture Magazine, Cattelan said, “The pope is more a way of reminding us that power, whatever power, has an expiration date, just like milk.”
Prior to La Nona Ora, Cattelan began turning heads in 1995 with a line of taxidermied horses, donkeys, mice and dogs.

One of his most poignant animal scenes is Bidibidobidiboo, which depicts the scene of a squirrel that has committed suicide in a dirty kitchen. Named after the spell of the fairy godmother in Cinderella, it has left many curious questions.

But one fact remains: the lifeless rodent on display is just one example of how death slinks quietly into the works of Maurizio Cattelan. In 2004, Cattelan explored the realms of death, childhood and fantasy with a piece that provoked many pedestrians in Milan to call the police. Their fears were assuaged when they discovered it was the newest piece by Cattelan, three barefooted children hanging from a tree in Milan’s Piazza XXIV Maggio.

An art exposition that has an initially unsettling effect, Cattelan explained it was a ‘mise-en-scene’ of a popular fable and he did it to present an image of hope, showing that we ultimately have the capacity to escape our destiny, roots, obsessions and nightmares.

A strange character to the very core, Cattelan has showcased a slightly less darker side. In fact, he is commonly known as the jokester of the art world for his pieces that are a satirical commentary on mainstream culture. Throughout his career as an artist, Cattelan has always caused some sort of provocation, though it has never been his direct intention, for he has been more intrigued by people’s reactions.

He has once said that a work of art is never complete without comments, words and ideas of those who stand in front of it. It’s those reactions that create the art.
It’s with bated breath we anxiously anticipate the Maurizio Cattelan movie, and much like with his pieces, we don’t quite know what to expect. But rest assured, in true ‘Cattelan style’ the reaction will be immense.

trailer Maurizio Cattelan: The Movie from Maura Axelrod on Vimeo.