The art of ceramics is one of the oldest human activities. Countless works have been created in our country, using only a handful of clay and a small fire. The term “ceramic” means “the action which involve the human acts to transform into objects by three elements necessary for the process by which transforms clay: earth, human manufacture and fire”.

In Italy for centuries the kilns were churning out outstanding masterpieces, housed in museums, private collections and antique galleries tourists flock in their thousands to visit its factories, the museum. Even today the Italian handmade ceramics are very famous all around the world and every year a lot of passionate visitors come to visit the main locations where this tradition is born and keeps going.

It’s really hard to write down in a few lines the all map of the art of ceramics in Italy but we can identify three towns which represent the center, the north and the south.

Deruta: The Tradition of Centre Italy 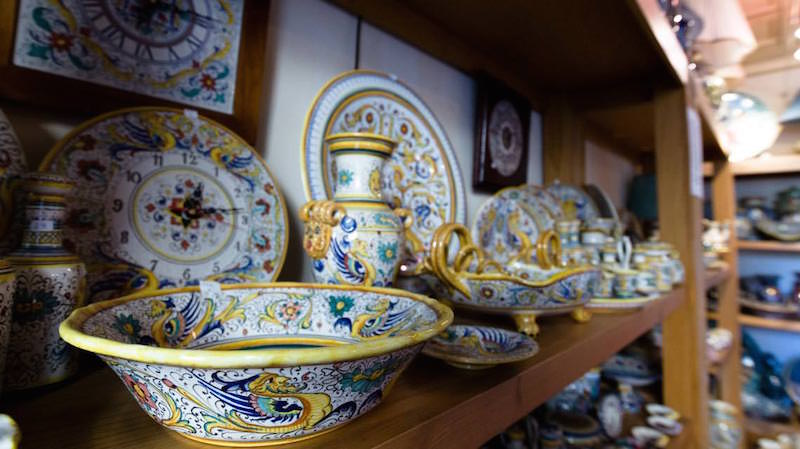 One of the most important places for ceramic tradition is Deruta. Situated in the heart of Umbria, a short distance away from Perugia, it stretches along the Via Tiberina, which, following the path of the Tiber leads to Rome. Deruta is considered the most important center of production of ceramics in the XV and XVI century, the golden age of the Italian ceramic. In these two and a half centuries, different styles developed, like the “petal back”, featuring simple petal-shaped decorations on the backs of the plates and patterns in “severe style” on the front. 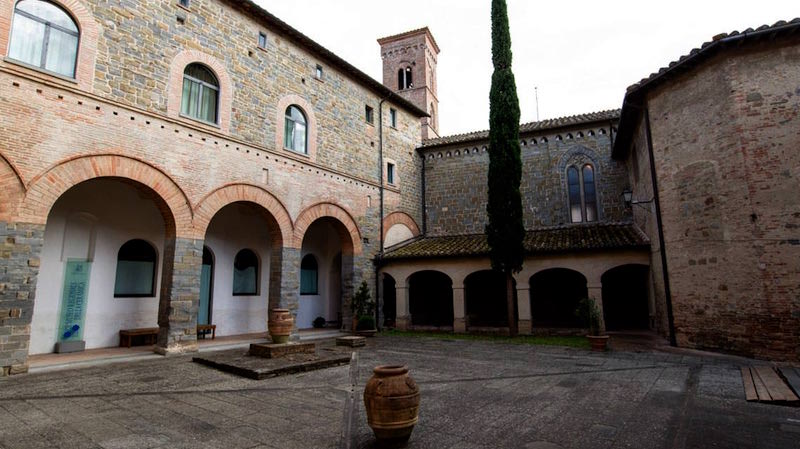 Other styles are the Raphaelesque style with its typical blue and yellow pastel shades and softer tones compared to the Gualdo-Gubbio productions. Among the many examples of Deruta’s ceramic art, the floor in the Church of St. Francis and the ex voto of the nearby Sanctuary of Madonna dei Bagni all deserve a mention. In Deruta you can also visit the Regional Museum of Deruta Ceramics, the oldest Italian museum for ceramics; established in 1898, it preserves over 6,000 works and is housed in the fourteenth-century monastery of San Francesco, completely restored.

Vietri: The Art of South 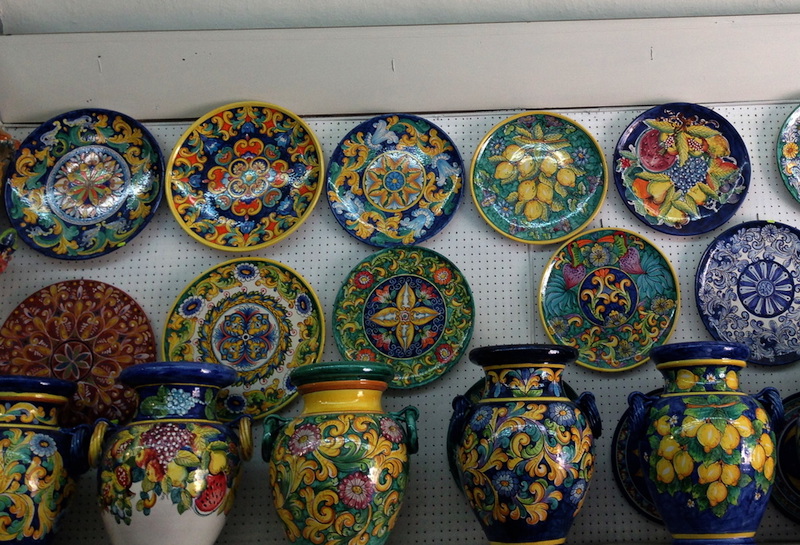 The art of ceramics in Vietri sul Mare, as well as important economic activity, could be considered a mix an imaginative craftsmanship that captures the charm of the colors of the Amalfi coast and that still signs the country and the whole area in an unmistakable manner. It has ancient traditions, although unfortunately not documented with certain powers to the inability to distinguish it from the contemporary ceramics arc Campania.
The XVII was important for the development of ceramics, favored by the immigration of Abruzzo and Irpinia craftsmen; Vietri ceramics handcraft was enriched with the most complete forms and artistic decorations. it was the period to which the objects linked to religious worship as domestic stoups, majolica tiles depicting religious. At the allies of Vietri we can see many majolica tiles portrayed by religious subjects. Link: www.vietri.com. 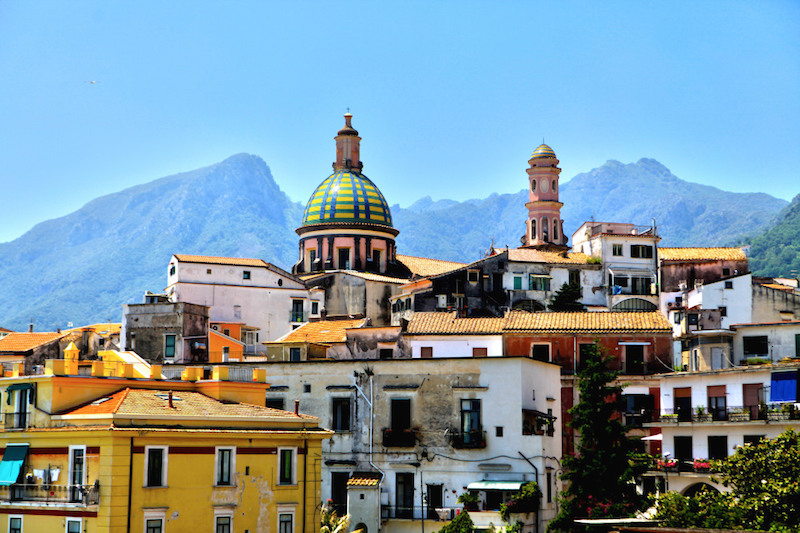 The vietrese ceramic art is very complexed; dinnerware and ceramic tiles are dipped in white enamel, let it dry and only then hand painted. The colors will be brighter thanks to a second firing that will set the drawn works
The history of Vietri’s ceramics industry is a millenary one – evidenced in the abundance of ancient remnants – and it characterizes this seaside village with its peculiar, colorful style. Learn about the typical ceramics tradition at the Fabbrica di Ceramiche Solimene, displaying contemporary ceramics works, and at the Museo Provinciale della Ceramica in Villa Guariglia. Curiosities indeed: since World War II, Vietri’s ceramics artisans have numbered new faces and new techniques within their trade. Specifically, it is to the Germans that remained in post-War Campania to whom such changes are attributed. As able chemists, these Germans newly-residing in Italy invented formulas that would lead to original and unique colorations for Vietri’s ceramics, including the famous yellow of Vietri.

Faenza: The Cradle of the “maiolica smaltata”

Faenza is a splendid roman origin city of art whose fame shone in the Renaissance period of the production of ceramics, charming workmanship, exported to many European countries. The first ceramics factories were born in Faenza in the first century A.C. At encourage the production of ceramics were probably the characteristics of the types of clays found in the waters of the River Lamone, where Faenza arose. However Faenza becomes famous for its pottery only several centuries later in the Renaissance.

The ceramics of Faenza is common called “maiolica smaltata” (majolica enamel); it’s referred with a ceramic or glassy coating made with tin oxide. A product that will follow a slow and constant development, both from the point of view of technical ceramics, is all the colors and decorations, to reach the pinnacle of success in the sixteenth century. At the end of the century, Faenza became the blooming center of a re-energized ceramic industry in Italy. A new, rich decorative style was created by pottery workers, reaching its highest point in the workshops of the town. Thanks to Faentine ceramists’ sophisticated technical achievements and insurmountable artistic skills, Faenza was then known as majolica earthenware “caput mundi”. 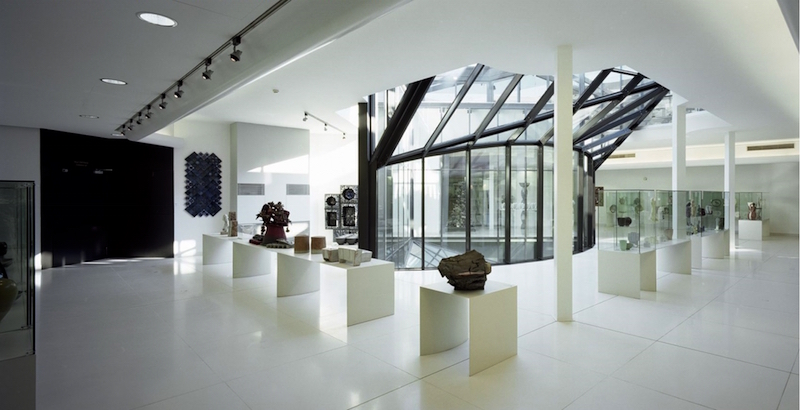 This “differentiated production” of glazed ceramic continued until the last half of the nineteenth century, when the ceramics of Faenza entered a critical phase that saw some of the major factories close. But the recovery was quick: the beginning of the twentieth century saw a cultural and artistic shift which had as its emblem the establishment of the International Museum of Ceramics (1908) the inspired intuition of Gaetano Ballardini. The museum soon became the reference point for Italian ceramics from all periods. Info: www.prolocofaenza.it.