Discover Apulia following our itinerary: we started from Alberobello, a destination worth visiting all the year round.

«The Committee decided to inscribe the nominated property on the basis of cultural criteria (iii), (iv) and (v), considering that the site has an universal value and it’s an example of how buildings made with prehistoric construction techniques are survived intact in the modern world.» 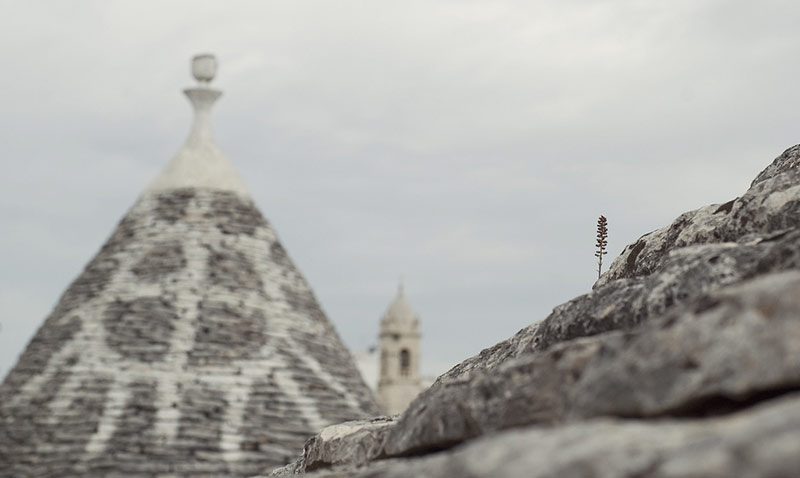 These are the words used in 1996 by the commissioners of UNESCO to motivate the decision to declare the beautiful town of Alberobello, located in Apulia, a World Heritage Site. This well-deserved reward allowed a greater development of tourism in one of the most beautiful areas of the Italian peninsula.

Let’s discover this little town, rich in history and places to visit, an ideal location for those who love tourism with a cultural twist. 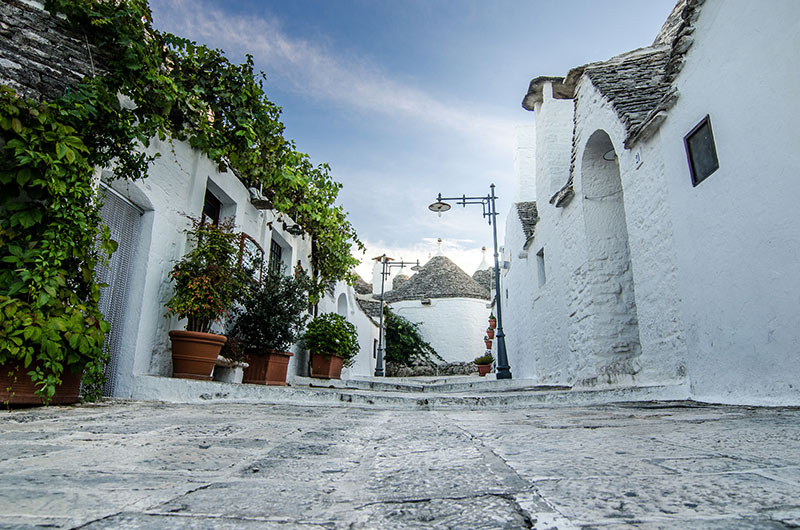 Alberobello: the beauty lies in its name 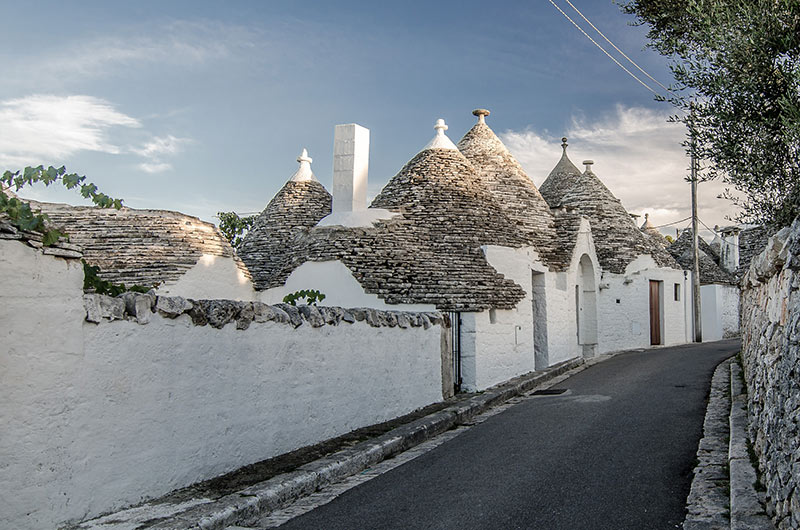 Famous worldwide for the Trulli, ancient dwellings characterized by a conical shape, made of stone and with the typical peaked roof, Alberobello offers to tourists many places of interest thanks to the presence, in the adjacent municipalities, of many natural attractions.

With a population of about 11 000 inhabitants, Alberobello is, in fact, a small provincial town, and, as expected, is very interesting not only from the standpoint of historical, archaeological and cultural heritage, but also for food and wine, folklore and commercial matters.

During the Christmas holidays, for example, among the trulli – specifically in the Rione Aia Piccola – is set up a very suggestive nativity scene, which is able to provide, thanks to the natural scenery of the town, a slice of the local life in the nineteenth century.

Like many Italian cities, Alberobello bases its economy over few items in particular: local crafts, specifically textile weaving and processing of iron, stone and olive wood, and in the production of wine and oil. The results of this hard work it’s proudly displayed in the characteristics shops; however the tourism, as we shall see, it’s not limited to the Trulli but also involves neighboring towns.

Alberobello: a stroll in the town center

The historic center of Alberobello is very unique, and is essentially divided into two neighborhoods, Rione Aia Piccola and Rione Monti, archaeological and architectural masterpieces among the most beautiful in the world.
Rione Aia Piccola takes its name from the wheat threshing that occurred in its area many centuries ago. Inside there are about 400 trulli, almost all inhabited; the total absence of commercial activities and the maze of narrow streets and alleys make this neighborhood a very suggestive place to visit. 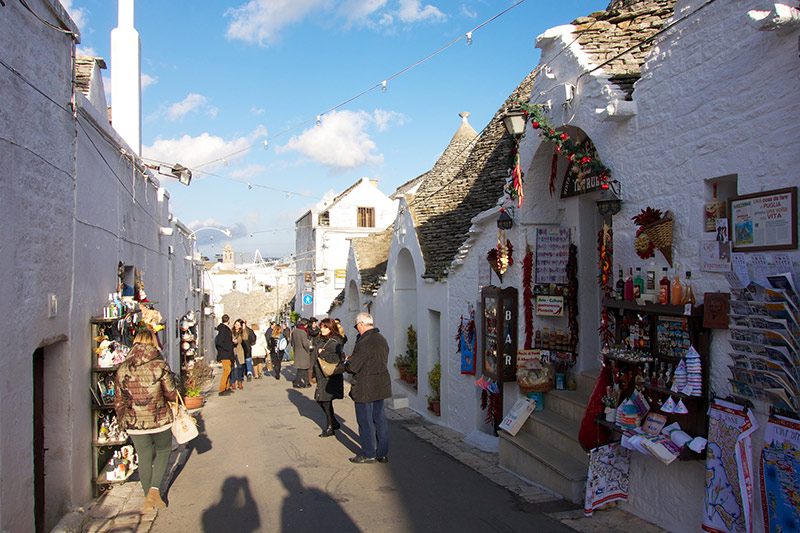 Separated from Aia Piccola by Largo Martellotta there is Rione Monti, which is spread over a wide area and includes more than a thousand Trulli, for a capacity of about 3 million people. Here it’s possible to visit the famous Siamese Trullo.

Siamese Trullo: tales of two brothers and only one love

The history of the Siamese Trullo is about two brothers who were in love with the same girl, who, despite being promised to the older brother, let himself be carried from his passion for the youngest. The older brother, taken by anger, drove out the two lovers from its home. The minor, however, claimed his share of the property, so it was decided to split the Trullo in two half. 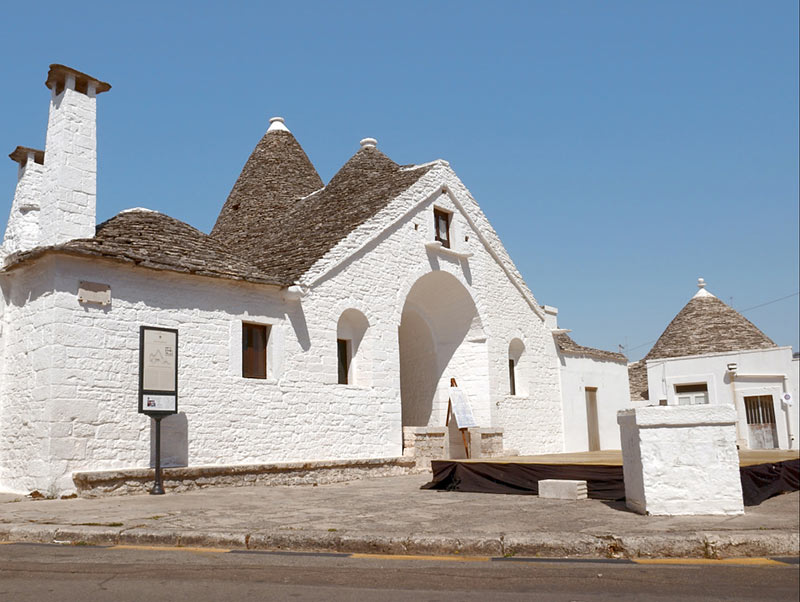 That’s why the structure has a double roof and two entrances placed at opposite sides of the road. An ancient story of love and jealousy that has created something pretty unique.

Sovereign Trullo: an evolution of the classic one.

The peculiarity of the trulli lies in the building’s technique, which did not involve the use of any type of mortar because the structures needed to be easily removable. Consequently, their shape is dictated more by necessity and less than a matter of aesthetic, including the self-supporting pointed roof, which rests on a base made entirely of stone. This explains why they are all, more or less, the same size, as larger build trulli has a significantly weak structure. 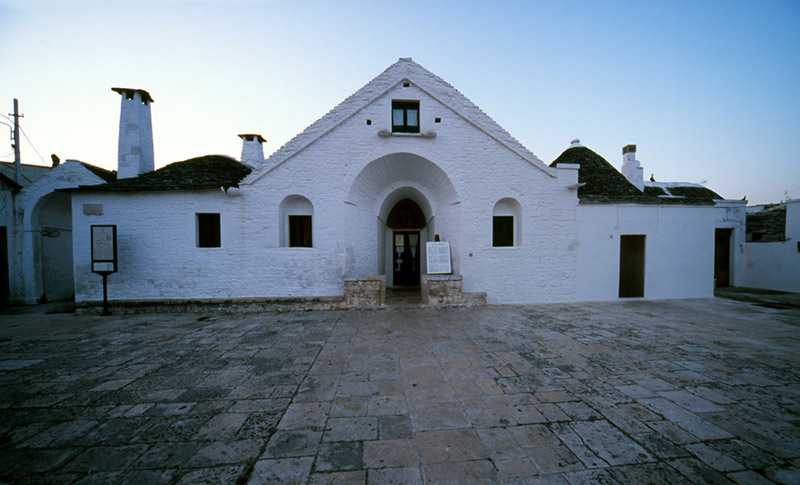 Only in the first half of the eighteenth century appears some changes in the techniques of construction, when the wealthy family of priest Cataldo Perta ordered the construction of a trullo of pretty important dimensions, with an engineering and creative effort unprecedented in history.

Arranged over two floors, the Sovereign Trullo presents a conical dome, about 14 meters high, which stands at the center of a group of 12 other cones; a peculiar building that certainly worth a visit. 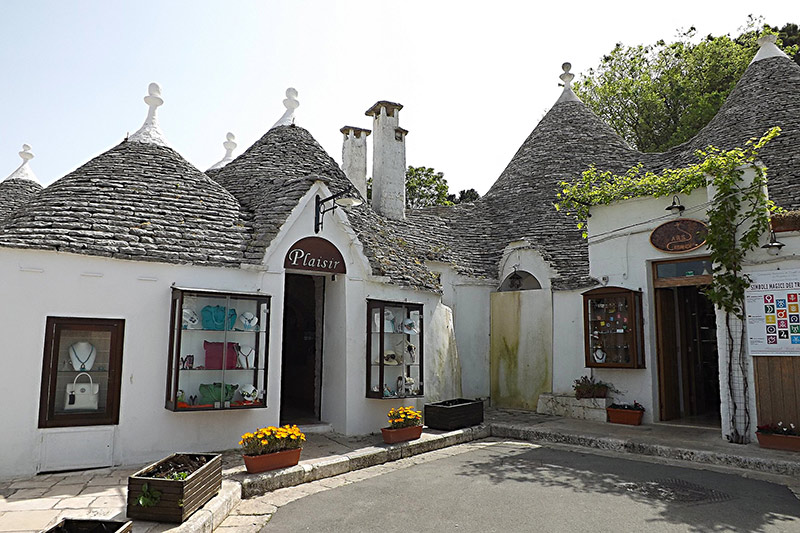 The local economy is mainly based on craft, which finds its showcase in the Trulli, undisputed symbol of the town. Every tourist, even the least shopaholic, loves to walk along the main streets looking for souvenirs and small gifts to give to friends and relatives. Alberobello meets the demands of visitors eager to spend some money to buy that product that can only be found in local markets. 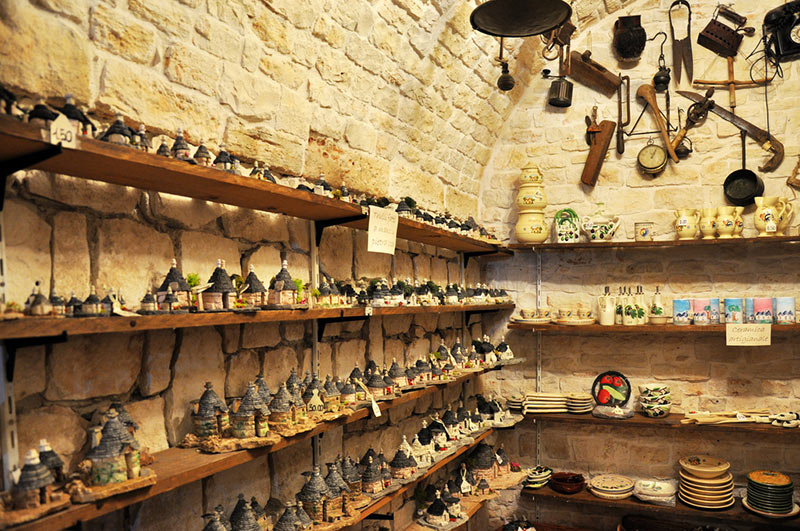 The shopping is even more interesting because it’s done right in the Trulli, which are transformed from small and humble houses to shops with a Mediterranean flavor. Textile creations, bottles of oil and local wine, baskets made by weaving olive’s wood, pasta, flour, bread, dried tomatoes, turnip tops, onion jam, the typical cheese “ascuante”, figs; each products of this land is carefully exposed in this small but cozy shops.

Putignano and its worldwide famous carnival 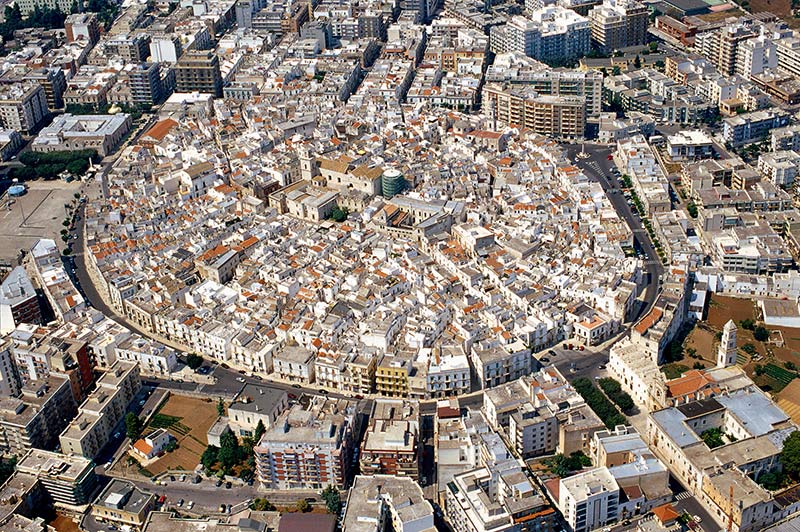 The town of Alberobello is located near other sites of sure interest for tourists keen to spend a prolonged holiday, because the territory offers the opportunity to visit different municipalities easily accessible. One of these is undoubtedly Putignano, town in the province of Bari, famous all over the world its Carnival.

In its 620th year, the Carnival of Putignano is the oldest in Italy and all over the world and is an example for others events as such. Beautiful folk dances, songs in Apulia’s vernacular, masks and not-so-innocents pranks; this festival finds its highest expression in the allegorical wagons, undoubtedly rich in details. Made by “mastri cartapestai” this wagons are inspired by traditional masks, popular movies, local fairy tales, stories and celebrities, always represented in a satirical way. 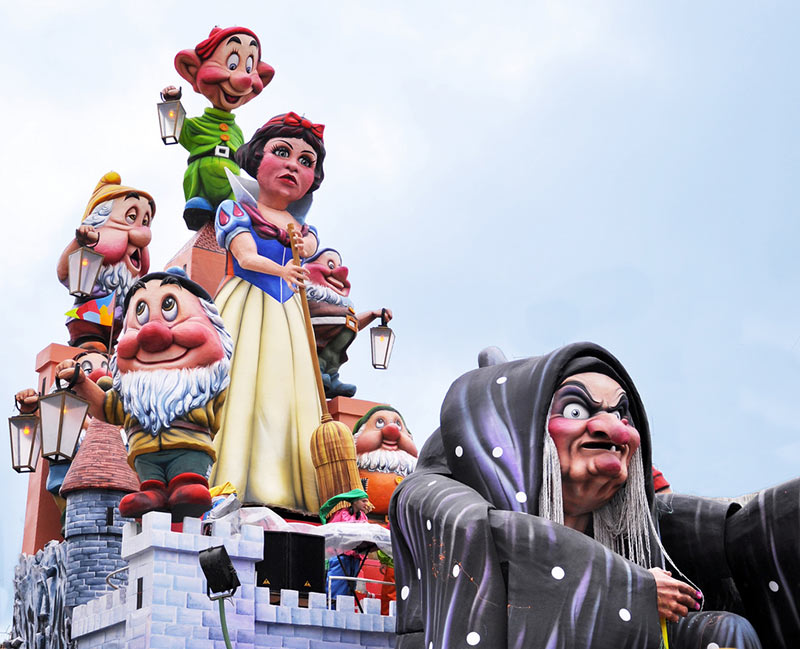 In recent years, the Foundation who leads the event requires to the committed craftsmen to follow a common theme. The symbol of the Carnival is the mask Farinella, which takes its name from a typical Putignano product, legume’s flour.

The event officially begins on 16 February and continues until 9 March 2015, but already from December 26 is likely to find the so called “offshoots”, which could be defined as the first archetype of the party as we know it today, while January 17, with the Feast of St. Anthony, the Carnival comes alive. 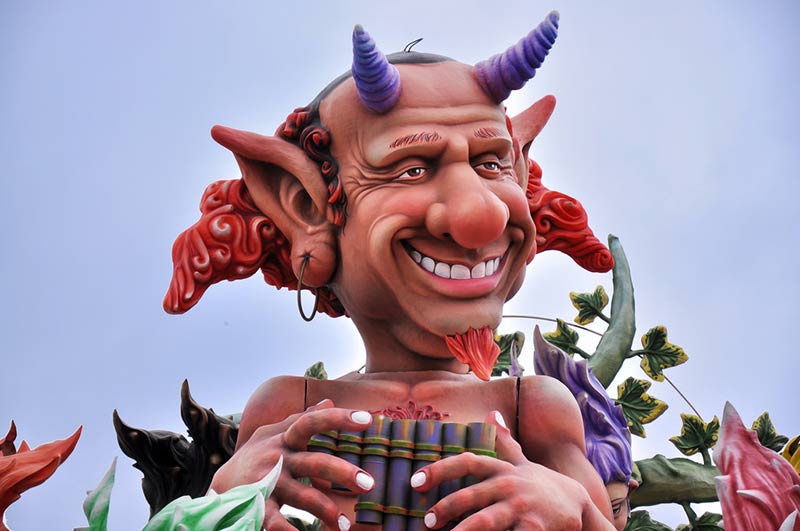 If you don’t fancy the folklore, the confusion and the popular festivals, and you prefer to experience a relaxing holiday, Alberobello will not disappoint you. In fact, the town is fully immersed in the Itria Valley, otherwise known as the Valley of Trulli, a portion of Apulia that stretches between the provinces of Bari, Brindisi and Taranto, including towns very suggestive to visit such as Martina Franca, Ostuni and Locorotondo. 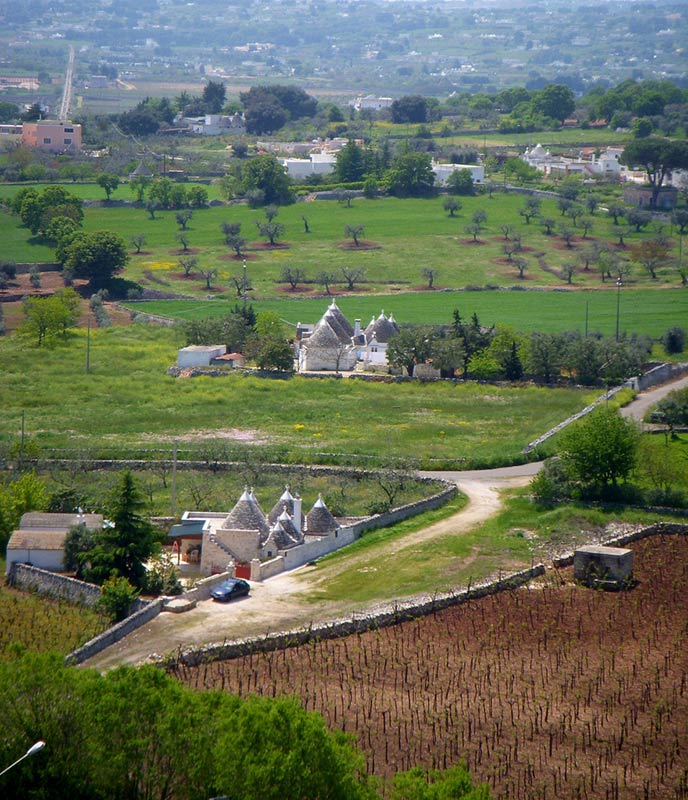 This valley is a piece of Mediterranean maintained in excellent condition, where you can come across vineyards which produce highly rated wines and you can see ancient olive trees which they grow the finest olives in the world, and in a very rich fauna, including hares, foxes, hawks, plus some birds at risk of extinction, like the vulture capovaccaio.

Forests, natural areas, clean air, good food and fine wine, what more could you ask for? 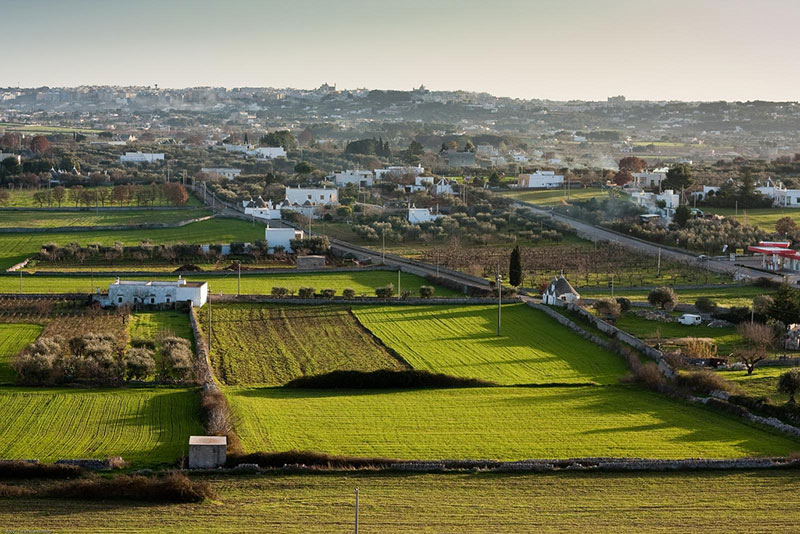 If you’re planning a trip to Italy, and in particular in Southern Italy, do not miss the chance to visit Alberobello and the wonderful territory in which it is located. Here you will find everything you need: art, culture, history, food, fun and last but not the least a stunning nature.

What are you waiting for?