A few kilometers south Milan begins the province of Pavia. Its northern side is surrounded by rice fields, mostly flat, and the “Pavese” becomes hilly in its southern part, called Oltrepò Pavese, where you can find one of the most Italian hilly tracts. The most important city of this part of Lombardy is Pavia.

Pavia was built as a result of early settlement by people from Gaul Transpadane and its ancient name of Pavia was “Ticinum”. Sacked several times by barbarians, it was conquered by the Lombards in 572 and made capital of their kingdom, with the name of Papia, from which the modern name. Lombard control lasted for two hundred years, until 774, when Pavia was conquered by Charlemagne.

Controlled by the Carolingians and, from the eighteenth to the nineteenth century, dominated by Spaniards, French and Austrians, in 1859 the city became part of the Kingdom of Sardinia, the future Kingdom of Italy. Crossed by the Ticino River, today Pavia preserved in the heart of its historical center the traces of a splendid past, in the monuments and cobbled streets. 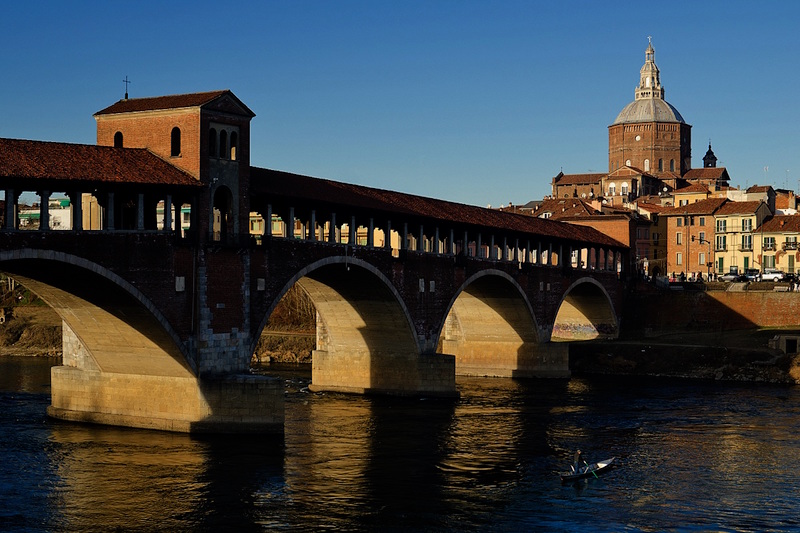 Its churches are the most important historic buildings of the city, and among them there’s surely the cathedral. Dedicated to St. Stefano Martire and Santa Maria Assunta, the cathedral, a Renaissance building, is very popular in Italy by its high dome with plant octagonal dome and a Greek cross, houses the remains of San Siro. 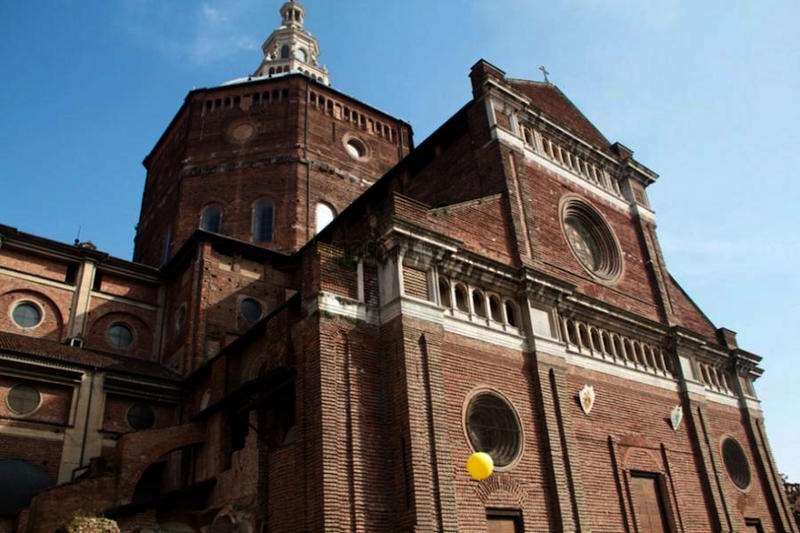 From there you can go on a visit to the beautiful Santa Maria Del Carmine, example of Gothic brick late Fourteenth century: the great rose window characterize the facade of the one, after the cathedral, is the church largest city. Other religious buildings we can point the Basilica of San Pietro in Ciel D’Oro, founded by the Lombards.

The oldest church is San Michele; the present basilica is typical of the Lombard Romanesque style of the so-called sec XII and held a huge importance in the eleventh and twelfth centuries. It was in fact used for the coronation of King of Italy and Emperors (Henry II in 1004 and Federico Barbarossa in 1155).

The present church is dated to the first half of the Twelfth century, after the great earthquake which destroyed many of the Padania churches at 1117. Inside the church there is a medieval goldsmith masterpiece, the Teodote’s Crucifix.

Other historical building is the Visconti Castle; residence of the Visconti and Sforza, was built by the count Galeazzo’s order in 1360 and was originally connected to the Certosa through the vast park that served as a hunting reserve and agricultural fields. Inside there are now the Civic Museums among them the Malaspina Art Gallery which houses paintings by many artists.

Very important for the city is its University, one of the oldest in Italy and Europe, in which have taught Alessandro Volta and Ugo Foscolo. At the university area, in Piazza Leonardo da Vinci, you can admire three medieval towers, but at one time there were more than 150 , and Pavia was called “the city of a hundred towers “.

Pavia has always been a university city and it has a pleasant nightlife with many bars and restaurants. Surely you will not be surprised to see so many university students cycling through the streets of downtown or chatting set on a bar table enjoying a drink of wine during the aperitif.
Leaving behind Pavia, heading the South, the Oltrepò Pavese is a Lombardy wedge that creeps between Emilia and Piedmont, bordering the provinces of Alessandria and Piacenza.

This land has a historical, artistic and cultural heritage and is very popular for its grapevines where an undisputed value wines are produced. As mentioned the landscape is hilly, with its charming medieval villages, castles, fortresses and patrician houses, but also a nature that invites to the walks in the woods, hiking, trekking. Stradella and Broni are not far from Pavia. 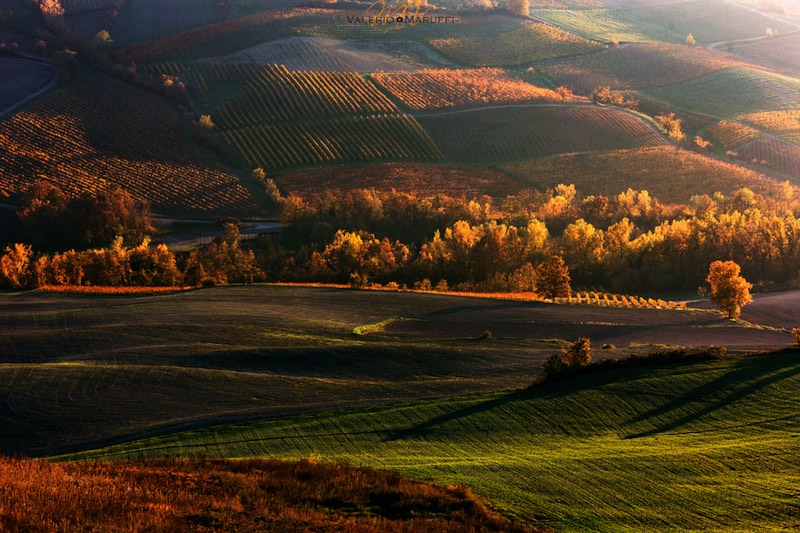 These towns face a hilly ridge which is mostly of vineyards locations. In fact the companies in the area are well known for their wine, in particular for a type that is typical of these hills: the Bonarda and the Black Pinot. This Oltrepò area is very popular especially during the week end of warm seasons; so many people from nearby towns come to try the local wines, and enjoy the typical restaurants.

The Oltrepò castles are other very important historical heritage of this area. One of those is the Zavattarello’s castle, the “Castello Dal Verme”. Stone-made, the castle is a gigantic building, a medieval fortress that resisted numerous sieges. A breathtaking panorama visible from the towers and the terraces surrounds all the lands: fields, mountains and low hills with other nearby castles like Montalto Pavese and Valverde. Other regarded castle is the Oramala’s, which was built by the Malaspina’s family in the Tenth century.

Set near Varzi, the Oramala castle stands on a hill surrounded by oak and chestnut woods, and dominates the small village of Oramala and Staffora Valley. It has a square-shaped floor plan, including a huge stone tower that dominates over everything and a large part of the building. The tower has a particular plant: a semi-circle shape leaning against a rectangle. The main entrance of the fortress is arched and was equipped with shutters. On top of this building is the chapel dedicated to St. Eufemia, built in the XIII century. Northern Wing is an underground room that we think could serve as a prison. Today the castle host a museum of the iron tools, known as the “Museum of Wrought Iron”.

Oltrepò Pavese is also very popular between trekkers and bikers. There are many trails in the whole area there are a lot of b&b and farmhouses to host them. One that trails runs from Varzi in Monte Penice; a route with more than 1000 m in altitude, rising steadily without jerking and offers panoramic views along the way. Or the Zavattarello’s ring; a short walk that fulfills the circumnavigation of the hill on which stands the Castle. For the bikers we suggest the itinerary among Montalto Pavese and Pometo; the boundless landscapes are the central theme of this itinerary, which takes place mostly along the hilly ridges of Oltrepò.