The Etruscans lived in west-central Italy, between Tuscany and Lazio, from the ninth century BC their culture reached its zenith in the sixth century BC before disappearing completely under the impact of Roman civilization with which partially melted. The disappearance of the Etruscans is still a matter of debate among scholars. But also their origin in Italy is still a source of debate. It’s certain that between Europe and Asia there is no trace of the community with the same characteristics both ethnic and social. 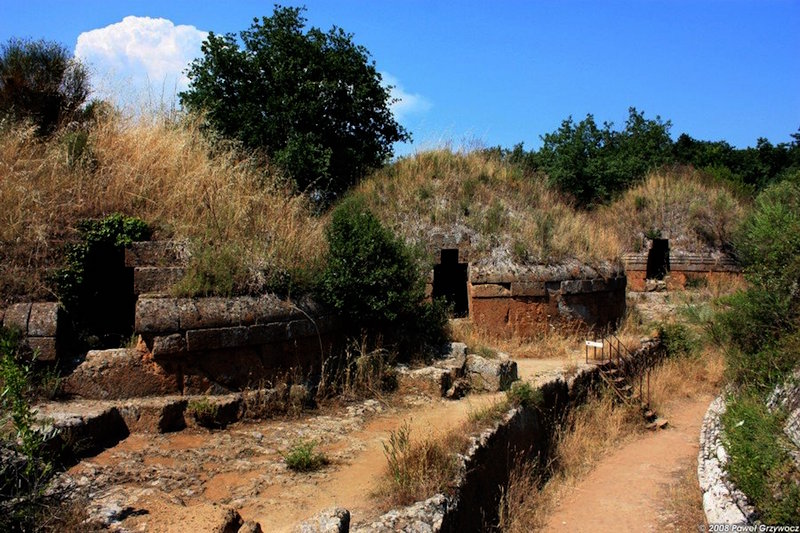 At least three more credited by historian’s hypotheses on the origin of these people who started the Italian civilization. The Greek historian Herodotus, who lived in the fifth century BC, argued the thesis of their origin by sea from Lydia, region of Asia Minor. According to other ancient historians, the Etruscans would have a population of Italic origin, who lived in the peninsula already ancient times.

The thesis that instead became part of the modern historiography is to groups from the eastern Mediterranean, bearers of a civilization technically and culturally evolved, which coalesced around the tenth century BC with the Italic population, giving rise to a new civilization.
Between the ninth and eighth centuries BC Villanovan age spread in Etruria and in some areas of Emilia Romagna, documented by the expansion of all centers which they would have been arisen the Etruscan cities of historical age. The population was organized in villages of huts suitable for agriculture.

The Etruscans gave great importance to the cult of the dead, because it was meant prestige and power for the family. In the Etruscans necropolis (the cemetery) the tombs were built in the appearance of the house and well equipped with furniture and furnishings, sometimes the walls were frescoed with scenes of everyday life or of the most significant moments, serene and pleasant of the deceased. Similarly, frames, beams, ceilings, designed to rebuild the home, were painted or carved into the rock.
The two necropolis of northern Lazio, Tarquinia e Cerveteri, faithful replicas of Etruscan town planning systems, are among the first examples of existing burial nuclei in Italy.
Added in 2004 to the UNESCO World Heritage List, These two archeological sites constitute a unique and exceptional testimony of the ancient Etruscan civilization, the only urban civilization of the pre-Roman in Italy. In the both necropolis there are painted tombs of the nobles and those in more simple styles that describe in very strong way the Etruscan’s quotidian life, as well as their ceremonies, mythology and even their artistic capacities. 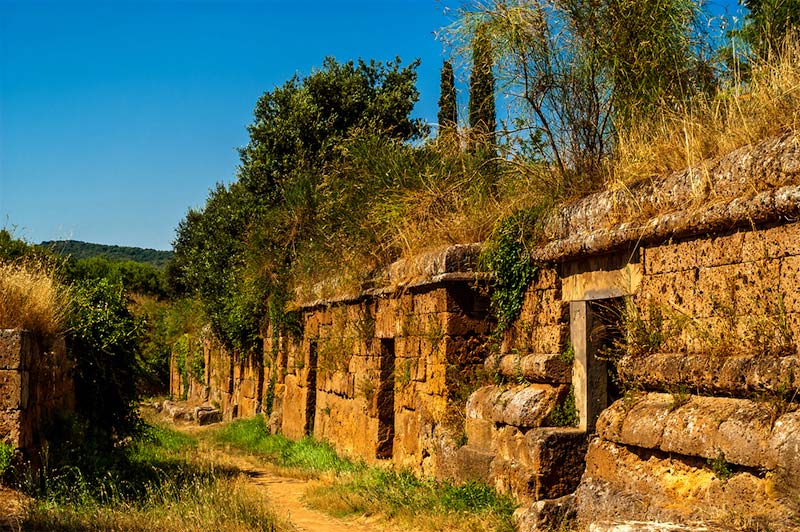 The necropolis in Cerveteri, called necropolis of Banditaccia, was built at the 9th Century B.C., and then expanded beginning with the 7th Century. The necropolis had thousand tombs. It was organized by an urban plan very similar than a common city, with streets and squares. The most representative examples of these structures is the “Tomb of the Greek Vases”, dating back to the 6th Century, of whom construction seems to imitate an Etruscan temple. Other essential example is “The Tomb of the Cornice”, accessed by way of an incline walk that leads to two smaller rooms that hold funereal beds on each side. From there, the path continues to a large central room that connects to other three principal funerary rooms. Indeed the “Tomb of the Capitelli” is a peculiar copy of that was a simply Etruscan home, with support beams of oak and reed.
Cerveteri necropolis most famous tomb is the “Tomb of Reliefs”, dated back to the 4th Century B.C. It’s a rock-cut tomb and its name came from a series of paintings that cover the walls and the chambers itself. The Tomb of the Reliefs was excavated at an important depth in the bedrock. The plan of the tomb is roughly quadrangular. The tomb decorations consist of carved bedrock features that have been painted. The decorative schema evokes the interior of an aristocratic house and some soldiers’ armor like shields or helmets has been stowed, hanged by hooks. 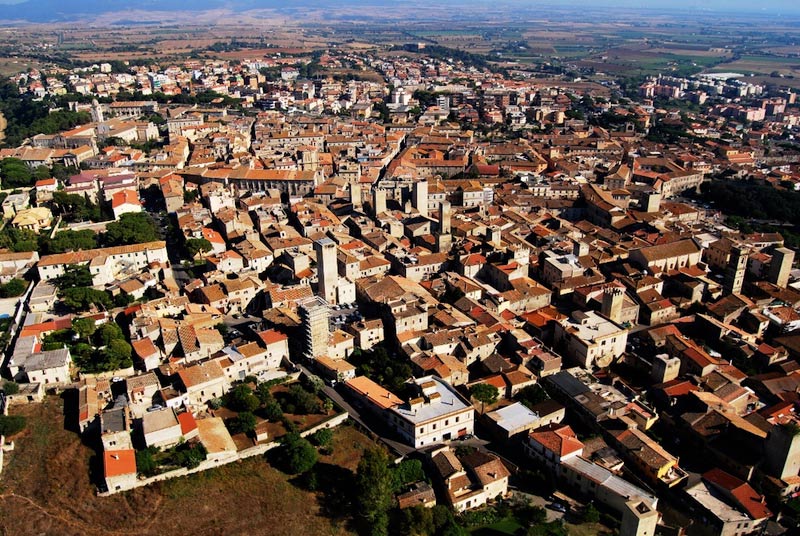 Ancient Tarquinia was one of Etruria’s most important cities and the largest collection is in the Necropolis of Monterozzi, which has about 6000 tombs dating back from the 7th century BC, dug into a volcanic tufa accessible by means of inclined corridors or stairways. The most important is the “Tomb of the Lionesses” which consists of a small chamber with gabled roof. Its paintings features birds flying and dolphins jumping around scenes of the Etruscan aristocracy. Other paintings describe men and women dancing, men are always painted dark red and women always white. Demons and musicians animate other walls. The other popular tombs are “The Hunter’s Tomb” and overall “The Tomb of Hunting and Fishing”, most studied. The bright colors of its paintings which illustrate birds are flying, fish are jumping and the ocean seems to have movement. 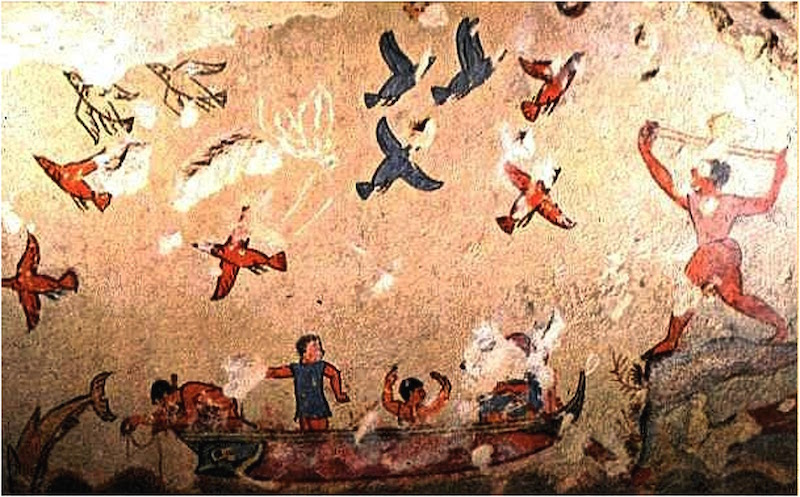 What to do in a weekend in Cerveteri and Tarquinia 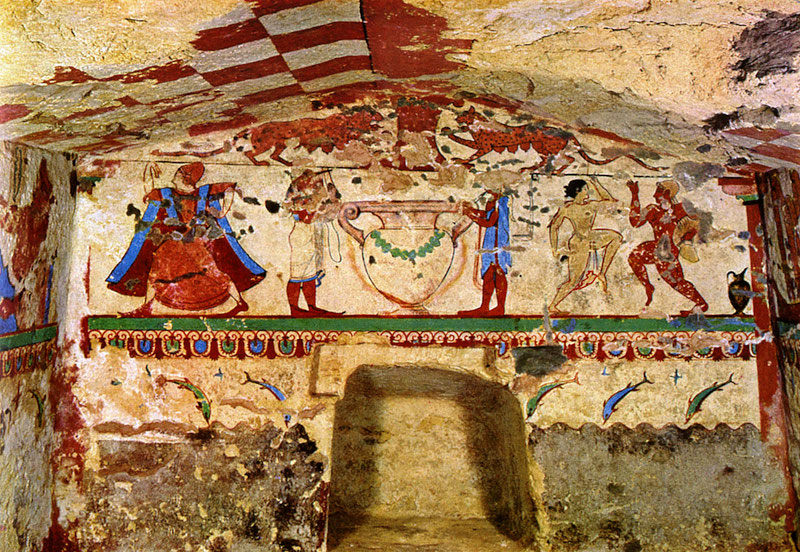 Cerveteri and Tarquinia are also two very pleasant cities to visit. Cerveteri is located very close to the coast of Lazio in the summer is a lively and busy area especially by the Romans. The towns of Laspoli and Fregene are among the most favored because they offer beautiful beaches and a vibrant nightlife. A week end gig in Cerveteri it may be an opportunity to relax on these beaches. You can visit the Cerite National Museum, located in the city center, which houses some archaeological remains found in the necropolis. Cerveteri offers also many seasonal events, such as regional festivals of typical products, like the one dedicated to the artichoke, but also music and entertainment events very often free usually concentrated in Piazza Santa Maria. 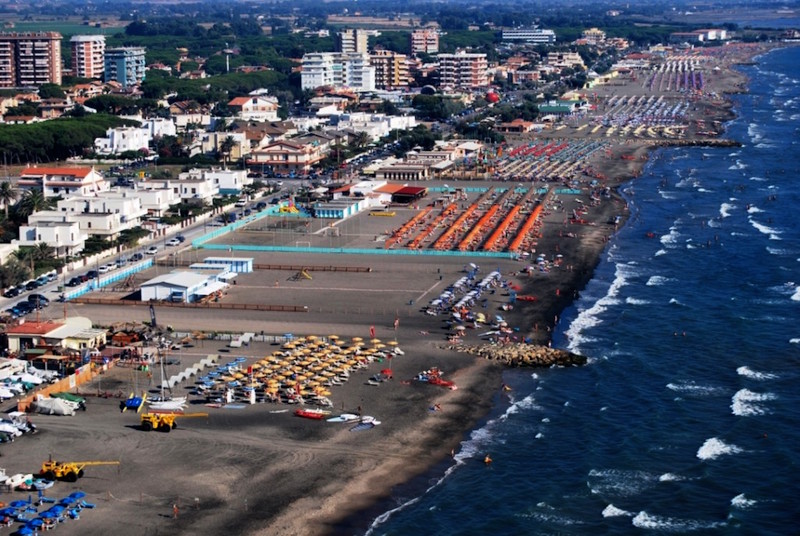 Tarquinia is very close to Civitavecchia and to the beautiful Maremma Toscana. Like Cerveteri is also very lively in the summer. In fact in Tarquinia in the summer there are concerts, sporting events and many food events.

In autumn and spring, the Maremma offers lush for pleasant rides through the woods with possible stops in all rural tourist eateries, or along the coast up to the Natural Reserve of Saline, where you can enjoy bird watching. Of great interest, in Tarquinia, there are its medieval churches in ruins and the large main square, but the pride of the city is made from the Archaeological Museum.

Located five kilometers from the center of Tarquinia there is Tarquinia Lido with its beach of fine sand. The coast is managed by beach organized with tourist facilities and services rental, paddle boats and equipment for all water sports. There are residential apartments, hotels, areas used for camping, restaurants and clubs as well as sports and recreational facilities, and nearby, even a golf course with club house. The campgrounds are undoubtedly a very important aspect of this stretch of coast, are in fact equipped with all necessary facilities to offer tourists the necessary comforts.