This is the story of a king living in a castle. He captures a flea that soon becomes his beloved pet. Fed and loved, the flea grows bigger and bigger, until it metamorphosis into a Kafkaesque domestic creature.

The king’s love is not enough to keep his pet safe, and, when it dies, the king falls into despair. He decides to excoriate its skin and to give his daughter’s hand to whoever will be able to identify the skin’s provenience.

The princess dreams to marry a charming prince, but it is instead an ogre who is able to solve the mystery.
Now, as you may imagine, this story is fictional.

However, the castle in which the story is set is not.
But, let’s take things slowly.

The king and his flea are two characters of the Tale of Tales, Matteo Garrone’s new masterpiece.
The movie, generously applauded at Le festival de Cannes, is a kaleidoscope of powerful love metaphors.

Its plot develops around three different stories. The one I just briefly told you is called The Flea and is set in Castel del Monte. Situated in the city of Andria, in the south of Italy, Castel del Monte has been standing on its promontory, isolated from anything else, since 1240.

Once again, a king was involved in its history. To be 100% accurate, it was not a king, but Emperor Federico II, who had inherited the lands from his mother, Constance of Sicily.

Federico II was not obsessed with fleas, but he was nevertheless quite eccentric. Nicknamed Stupor Mundi for his cosmopolite attitude and his huge culture, he wanted the castle to be a true wonder, able to reflect his grandeur.
He called architect Riccardo da Montefuscolo to his court and, after days of speculations, they decided to tie Castel del Monte to the number eight, universally considered a symbol of cosmic balance.

Thus, the castle was built with 8 rooms on the ground floor, 8 rooms on the second floor and 8 towers. Moreover, the rooms are trapezoidal and placed in order to form more octagons.

Luckily, it’s not all about math: Castel del Monte position was studied to create symmetries of light and dark during the winter solstice and the summer equinox.

But what was Castel del Monte built for? Although it has a military look, it does not feature the typical military monuments from the same period, like moat and stables.

Over the years, many theories have been conceived: 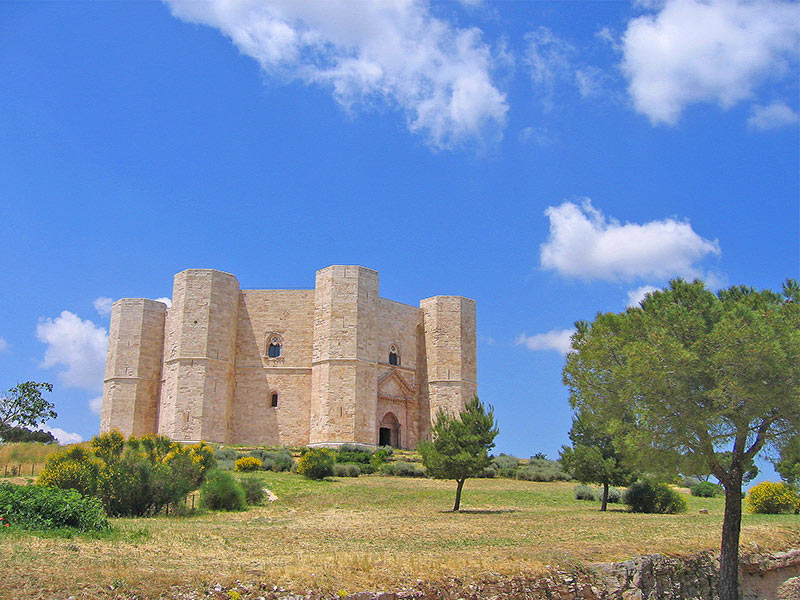 Today, Castel del Monte purpose is still unknown.
Hopefully, soon somebody will unravel the mystery. Let’s only hope it is not an ogre.