Many Italian cities have a historic center to discover, full of history. The city squares are often the symbol of their centers.
Certainly it is useless to present squares that the whole world knows, such as Piazza Navona in Rome, Piazza del Duomo in Milan or Piazza della Signoria in Florence. Many squares deserve to be visited in Italy.

We want to recommend 15 squares that are absolutely to be seen. In every region you are, a beautiful square waits a visit. 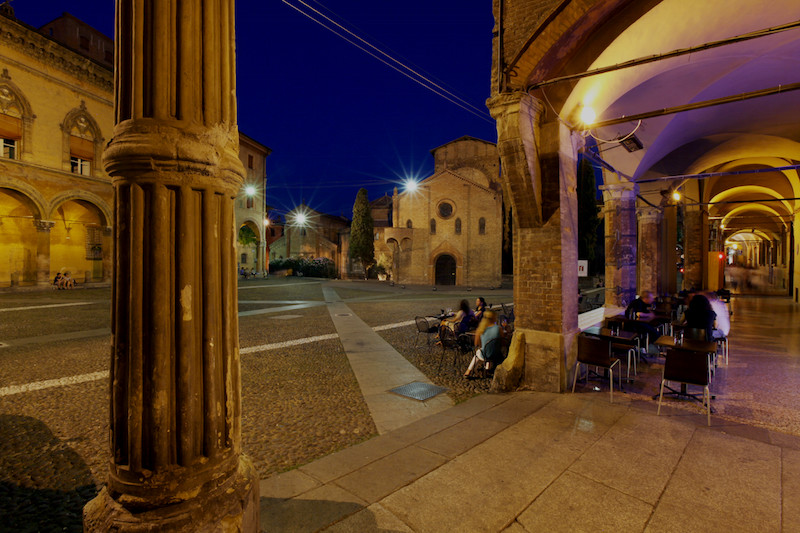 Piazza Santo Stefano is one of the most popular square in Bologna. Shaped like a triangle, Piazza Santo Stefano is called “The Seven Churches” square because originally it was made up of seven buildings connected to each other.
They reproduced the holy places of Jerusalem and was an important place of worship for all those pilgrims who couldn’t go to the Holy Land.
Close to this wonderful square, three churches can be visited: the church of the Crucifix, the church of the Calvary, and the church of Saints Vitale and Agricola. The square in the warm seasons becomes a meeting point even thanks to the many bars all around it. A popular antique trade is set on Sundays. 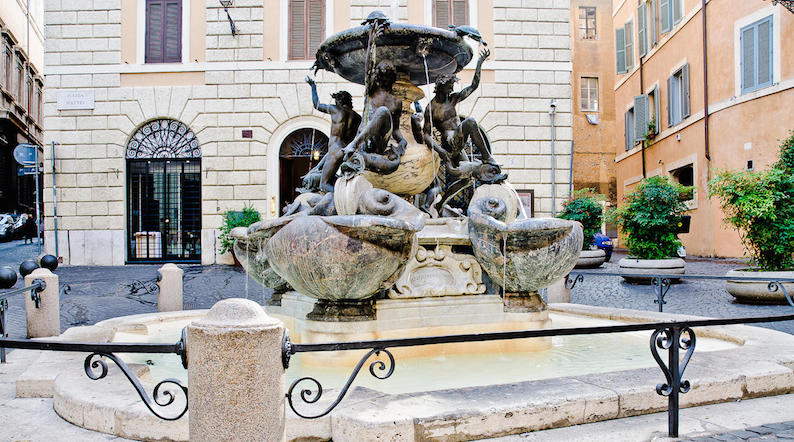 Inside the historic district Rione Sant’Angelo, after has long been a Jewish ghetto, there is a little square of Renaissance origin, as is well demonstrated by the regularity of its shape.

Piazza Mattei has become a pedestrian tiny place, thus enriching the whole area and encompassing it in a quiet atmosphere , despite it’s just beside the traffic of the Corso Vittorio Emanuele II and Piazza Venezia.
The noble Mattei family controlled its business on the stretch of the left bank of the Tiber river, overlooking the Tiberina Island and beyond, using the Jewish manpower to which they promised and guaranteed protection.
They erected a palace and built the Turtle Fountain, designed by Giacomo Della Porta and realized by Taddeo Landini; the bronze turtles around the upper basin are attributed to Bernini. 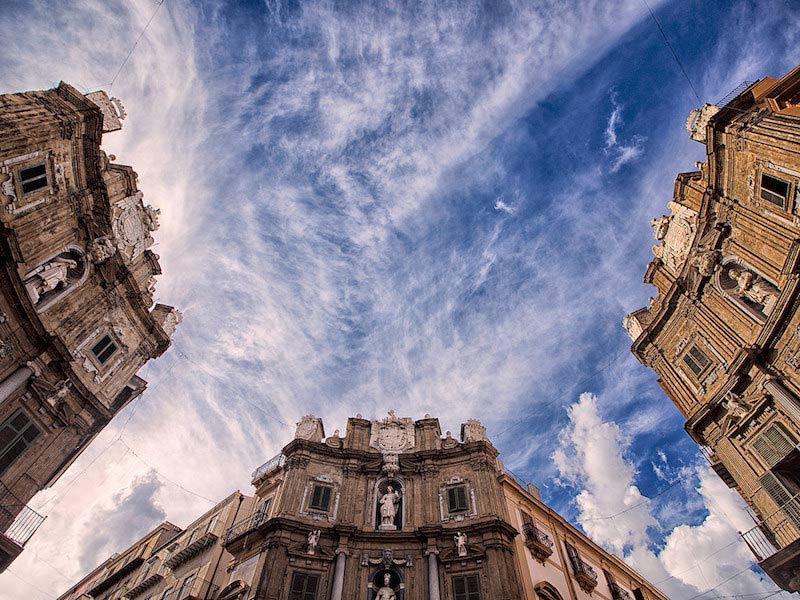 Piazza Quattro Canti in Palermo was built in the XVII century. The square forms an octagon with four spectaculars Broque buildings. The idea was probably derived from the prototype of Piazza delle Quattro Fontane in Rome and there are four buildings (the Quattro Canti) in the Baroque style similar to the Roman square.

Its proper name is Piazza Vigliena, named after from the Viceroy and Marquis don Juan Fernandez Pacheco de Villena y Ascalon, but is also known with the names Ottagono del Sole or Teatro del Sole because at all hours of the day at least one of the five prospects that characterize the square is exposed to the sun. 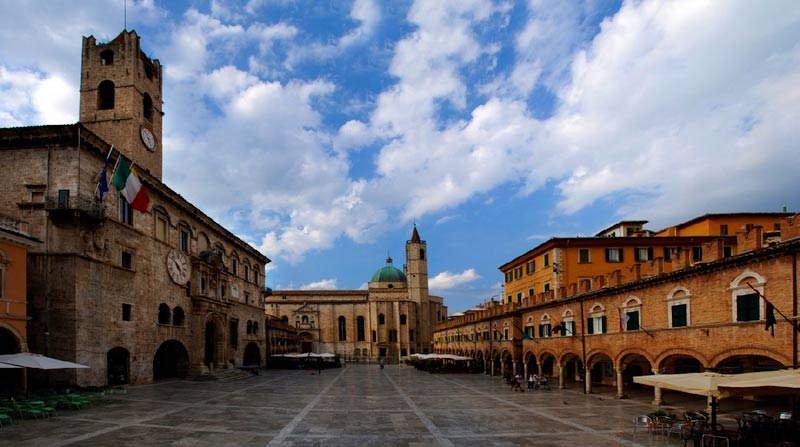 Fully paved with travertine slabs, Piazza del popolo at Ascoli Piceno is amazed by its luminosity and refinement, which arises from a sophisticated intertwining of arcades and loggings, historic buildings and churches with gothic and elegant features.
Piazza del popolo assumed the current architectural configuration in the early Sixty century, when the governor Raniero de Ranieri took care of his accommodation, funded by public expense in 1507. 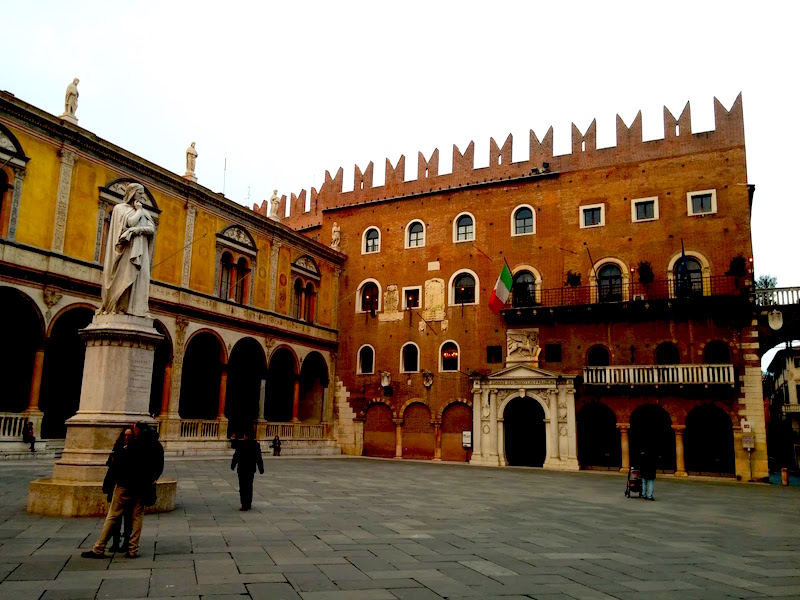 Piazza dei Signori is, together with piazza delle Erbe and Piazza Bra, one of the most important and significant places, both historically and artistically, in the city of Verona. It is definitely a charming and elegant place, considered for this “the living room of Verona”.
The square rises on a part of two Roman blocks close to the ancient hole, today Piazza delle Erbe. A few years ago, archaeological excavations brought to light at the edge of the square a thistle and a minor decumanus, two of the streets that made up the typical pattern of each Roman city. 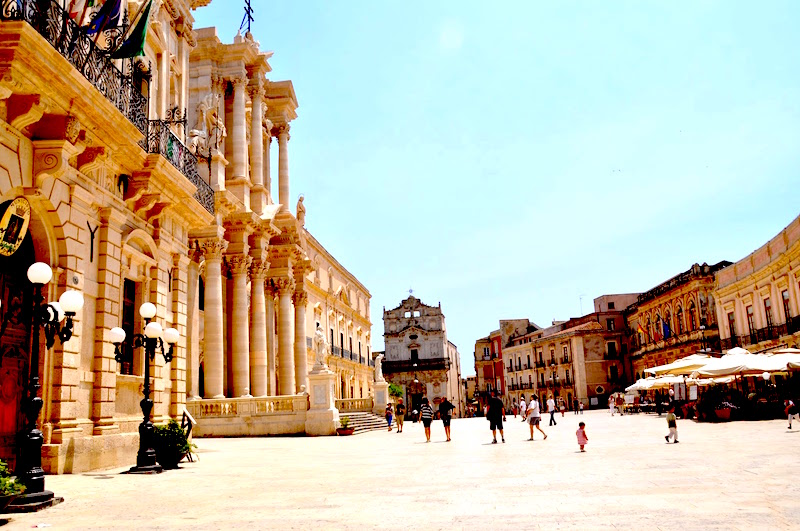 In the upper part of the island of Ortygia, located at the eastern end of Syracuse and is separated from it by a narrow channel, there is Syracuse Cathedral square, where rises the Cathedral included by Unesco among World Heritage Sites.
The current façade, masterpiece realized by architect Andrea Palma, is one of the best Baroque buildings in Syracuse, ans was builtbetween 1728 and 1754. 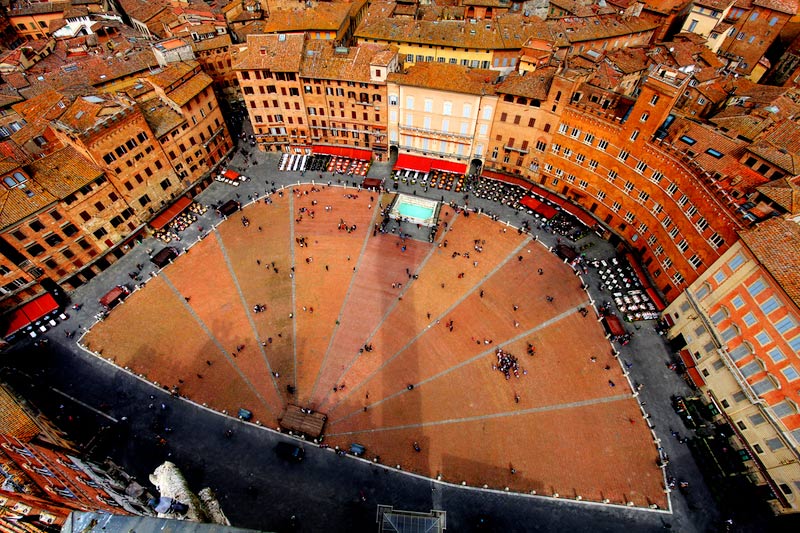 Worldwide renowned for its architectural beauty and its special shape of shell, lying in a slight altitude on the junction of the three hills on which the city rises, Piazza del Campo attracts millions of tourists every year from every part the world.

The best way to admire Campo Square or “Campo” as the Sienese call it, is to climb the Torre del Mangia, which stands next to Palazzo Pubblico.
From here you can see how the Piazza is the starting point and the arrival point of each itinerary to discover the city.
From the tower you can also admire the characteristic shape of shell with 9 spikes, each one dedicated to one of the members of the Government of the Nine that made Siena as we can still admire today.
Piazza del Campo is, above all, the set of The Palio race, held twice a year. 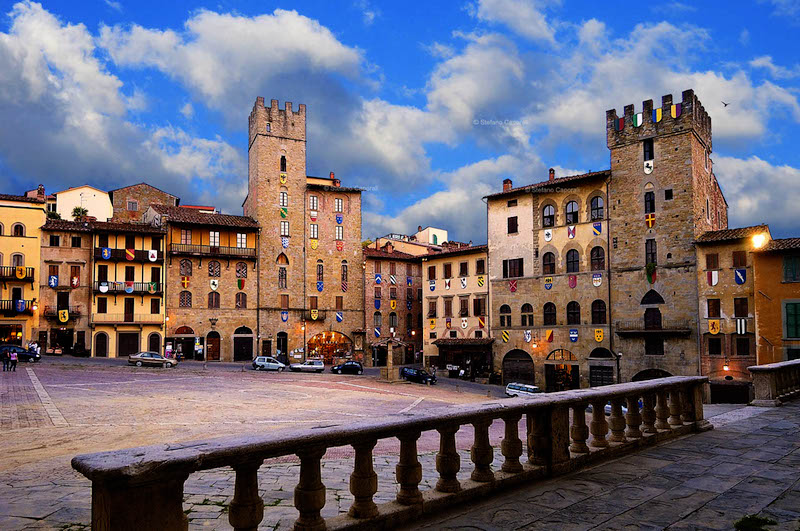 Piazza Grande is the most beautiful public square in Arezzo, a medieval city in Tuscany. The square is a mix of buildings of several ages that gives an evocative and scenographic aspect.
The West side of the square is characterized by a romantic style due to the apse of the Pieve di Santa Maria, and the baroque style of the Palazzo del Tribunale. On the same side there is also a splendid public fountain and the elegant palace of the Fraternità Dei Laici characterized by three different styles: gothic on the lower, renaissance in the central and late renaissance at the highest part. Dedicated to the great artist and architect like Giorgio Vasari, this square is especially remembered for the ancient Saracino’s Giostra that took place here in medieval times. The Giostra is a race between knights and a historic procession with three hundred figurines and flag-carriers animate the square. It takes place on the penultimate Saturday of June. 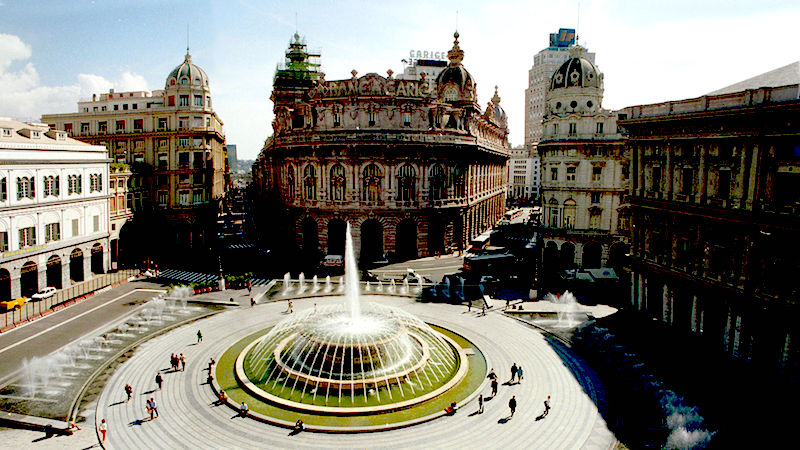 This square is dedicated to an important character of Genoa nineteenth century: Raffaele De Ferrari Duke of Galliera, husband of Maria Brignole Sale (very important female character of Genoa in the eighteenth century). Duke De Ferrari donated to the city 20 million lire (1875) for the extension of the port to the West. Piazza De Ferrari is the center of Genoa in which is set Palazzo Ducale and two other historic buildings, dating from the Sixteen century but restructured in the Nineteen: The Carlo De Felice Theatre and the Church of San Domenico. But the symbol is the big fountain in the middle. 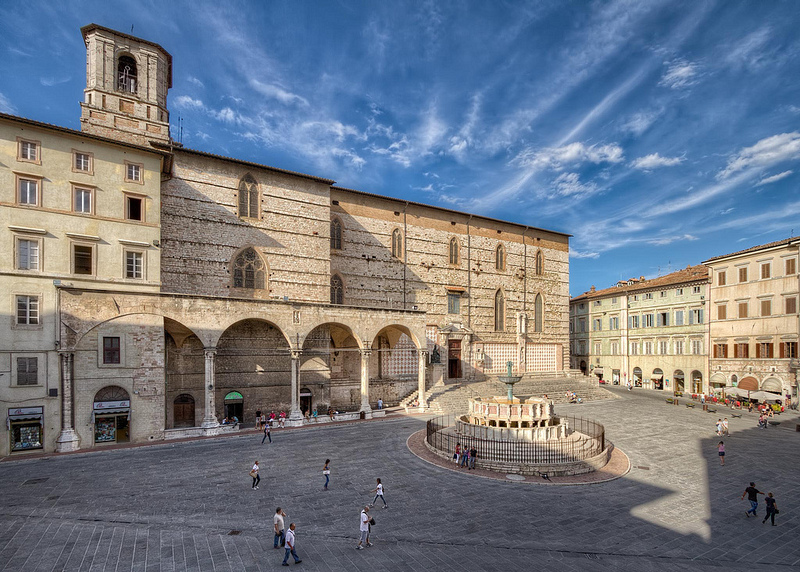 Situated in the historic center of Perugia, the asymmetrical Piazza opens to the convergence of the five roads that structure the medieval city: here was the ancient hole and there are preserved monuments connected to the urban layout of the Etruscan-Roman City. The square changed its appearance in 1591, when a new and wider access road (the current Calderini street) opened: the urban scene is characterized by the natural slopes of the sole and the facades of the major monuments of the city (Fontana Maggiore , Cathedral of San Lorenzo, and Palazzo dei Priori). Piazza IV Novembre is a scenario of summer concerts during the Umbria Jazz Festival. 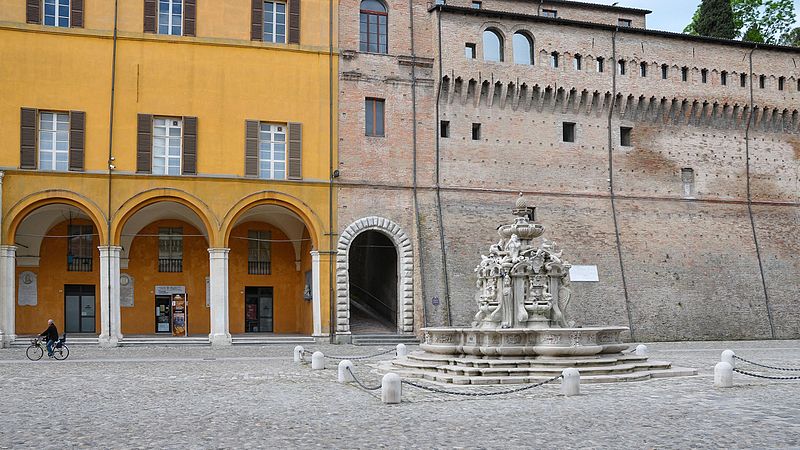 Cesena is a Emilia Romagna city set between the Appennini hills and the Adriatic sea.

Formerly called Piazza Inferiore was located just along the path of Via Emilia. The realization in today’s form is due to Andrea Malatesta, who in 1400 made part of the hill on which the Rocca rises. It was located before the Signoria, then the Pontifical Governor and finally from the 1722 of the Municipal Administration.
Piazza della Vittoria, Pavia

Piazza Vittoria is the main square in the city, known as “Platea Magna”, a large square opposite the “Platea Parva”, the “small”, Piazza Duomo. It was the venue for commercial and market negotiations. Almost entirely surrounded by Fourteen century portico, it is limited by the ancient palace of Broletto and the noble Gothic palace of the “Diversi”. The church of Santa Maria Gualtieri, founded in the Ten century, overlooks the square, at the will of the imperial representative Gualtiero, who erected near his home. Today it is used as communal space for temporary art exhibitions. 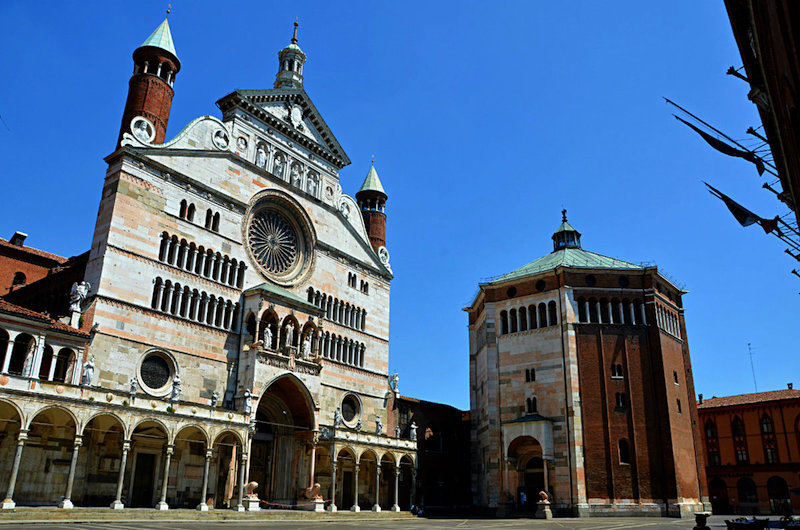 One of the best medieval town in northern Italy, famous for its violins, for its spinach and salami, the historic center of Cremona has its artistic peak in the medieval Piazza del Comune, where history and medieval architecture blend drawing fascinating glimpses.
The Torrazzo, which from its top of the 111 meters above all dominates, undoubtedly dominates the scene of the Comune Square without thereby undermining the elegance of the Bertazzola porch with the marble facade of the Cathedral of Santa Maria Assunta or the beauty of the Baptistery or the thirteenth-century the Loggia dei Militi and Palazzo Comunale. 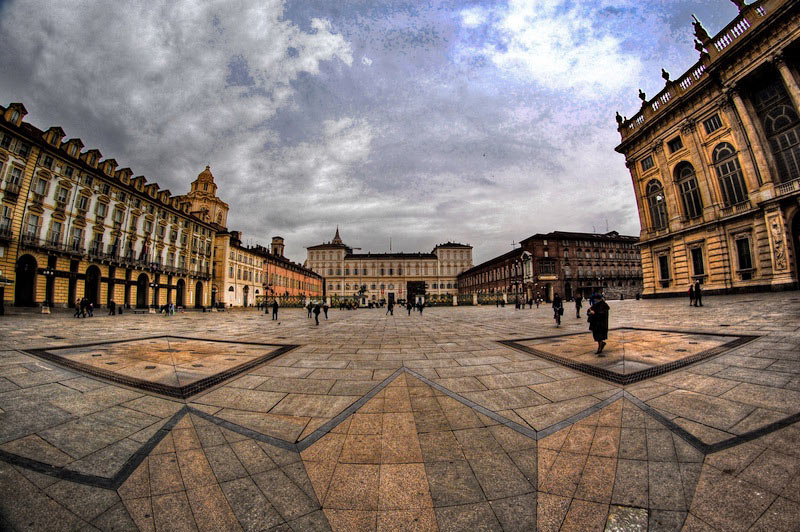 After Piazza Vittorio Veneto, Piazza Castello, with its 40,000 square meters, is the second largest square in Turin. The square, located in the center of Piedmont’s capital, was designed by architect Ascanio Vitozzi in the year 1584. The center of aristocratic life during the Savoy kingdom, Piazza Castello is still the hub of the city of Turin.
On the square are located some of Turin’s most important attractions, such as the Royal Palace, are located in the center of the square, the Teatro Regio, one of the most important opera houses in Italy, Palazzo Madama, which was the seat of the Senate Subalpine, the Real Church of San Lorenzo, where the Sacred Shroud was once housed. 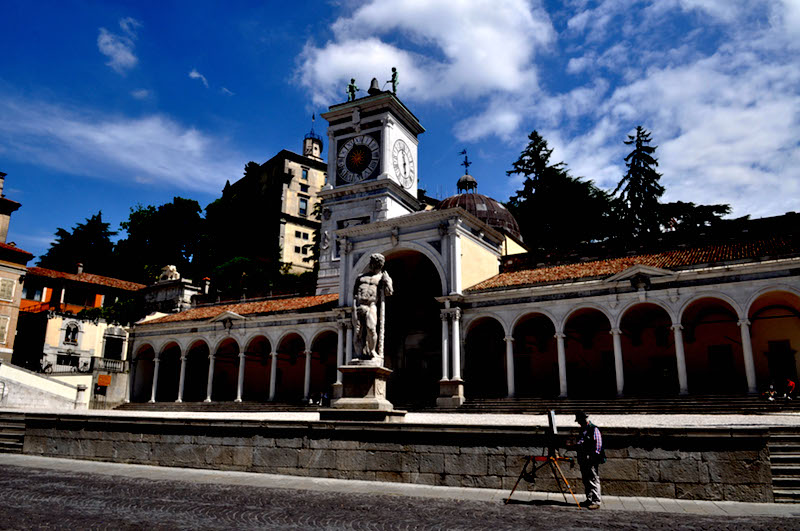 Piazza Libertà represents the heart of Udine. The square changed its name several times. In the Middle Ages was Piazza del Vino because there was a dedicated market. In 1350 Piazza del Comune because the Town Council use to met here. In 1550, when the Venetians arrived, it became Piazza Contarena in honor of one of the lieutenants who fought for the annexation of Friuli to Italy. The most important buildings situated at Piazza della Libertà are Loggia del Lionello and Torre dell’Orologio. The sculptures which as The Statua della Libertà have been restored recently.